Financial aid can be an extremely complex process for many students and families. As higher education access expands and more low-income students, first-generation students, students of color, and students whose first language is not English make up larger portions of the college-going population, some institutions are finding it challenging to meet the unique needs of all students and their families.

But one institution — Des Moines Area Community College (DMACC) — has found a way to bridge the gap and help make financial aid more digestible for broader groups of students.

"Our main goal is to identity communities that are underserved, identify opportunities, reach out more into those communities, and provide more services," Agyeman said. "We have a lot of first-generation students, immigrant and international students, and refugee students that are placebound."

Agyeman has been working at DMACC since 2004 and had previously worked at a financial aid administrator and in admissions at other local institutions. He had also attended DMACC as a student after moving to Des Moines, Iowa from Ghana, West Africa. 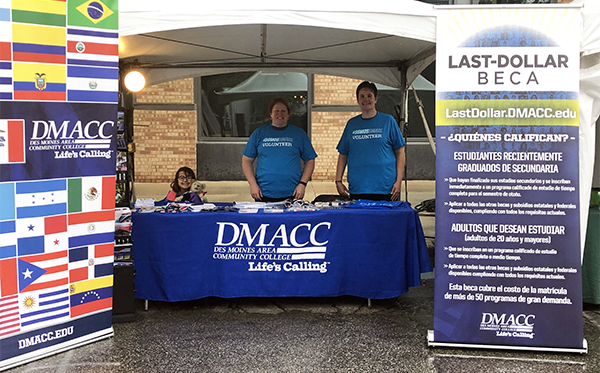 The Office of Community and Global Engagement was created after Agyeman noticed a gap in the demographics of the community versus the students being served at the Des Moines urban campus. According to Agyeman, the Des Moines Public Schools system is made up of "majority-minority schools," with a heavy concentration of Hispanic and Latino students.

Since several of DMACC's other campuses also serve large Hispanic and Latino populations, Agyeman decided to prioritize engagement with that community first by working with the financial aid office to translate a four-page brochure explaining how the financial aid process works at DMACC into Spanish.

Ean Freels, DMACC's financial aid director, highlighted the importance of not only translating financial aid materials into Spanish, but making sure that the institution is engaging fully with those students and their families.

"If you offer those resources in Spanish, and then the student or parent reaches out to you via email or phone, are you prepared to have that conversation in Spanish or another language?" Freels said. "We have to make sure we have the resources to continue the conversation."

To build that engagement and continue the conversation, Agyeman hired a Spanish translator.

"When [students and families] call, they reach her phone and she's able to communicate with them in Spanish or at least call them back in Spanish," Agyeman said.

"My team will go to urban downtown high schools [in Des Moines] and help with FAFSA completion nights, where there are very diverse student populations," Freels said. "There are bilingual liaisons, some of whom are DMACC graduates, who are now helping other students access an opportunity at DMACC. Most of the students have fine English language skills — it's their parents, sometimes, who need that help."

Freels emphasized the importance of trust when working with immigrant students to understand access to federal, state, and institutional aid, especially when it comes to vulnerable populations such as students in the Deferred Action for Childhood Arrivals (DACA) program who can often be fearful of identifying themselves or their families. One way DMACC has worked to build that level of trust is by going into the high schools to meet directly with potential students and their families.

"When the financial aid nights are available, even if it's going to help the students complete a FAFSA — being there and being present with your DMACC pin on or your DMACC shirt on — you can let them know that you can be trusted," Freels added. "You can start developing that level of trust so you say, ‘It's OK to fill out this FAFSA,' or ‘It's OK to fill out this scholarship application.'"

Freels also said that members of Agyeman's team, who also attend the FAFSA nights and provide Spanish translators, are the best institutional resource to engage with the students and their families to help them understand the financial aid process.

DMACC has also promoted engagement in the community by participating in cultural events such as the Latino Heritage Festival and by working with translators to communicate in Spanish, provide brochures in Spanish, and even — for the first time — translating the wrapping on DMACC's recruitment truck into Spanish. 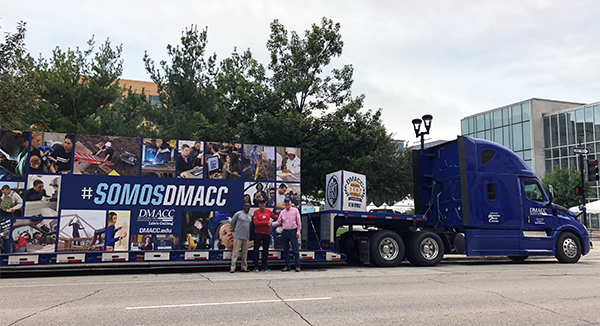 Agyeman plans to continue building engagement with Spanish-speaking students and families at the institutional level.

His office has also worked with other DMACC offices — like the admissions office — to identify problems some students face during that process, such as eliminating a citizenship question on the admissions application that made many students uncomfortable due to concerns about their or their parents' immigration status. Agyeman's office has also worked to train faculty and staff on diversity and inclusion initiatives as well as unconscious bias training.

Agyeman said he is proud of the work his office has accomplished in just six months, but recognizes there is a lot of work to be done. Moving forward, he said he hopes the office will continue to grow and develop materials and community liaisons in other languages to help better serve a broader population.

"We're a community college, so access is huge," Agyeman said. "And it's not just getting students to campus. Once they're here, we want them to finish."

Off the Cuff - Episode 154 Transcript

Off the Cuff - Episode 126 Transcript