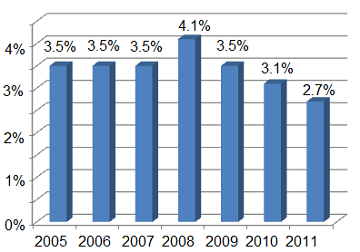 “In 2010, the Department of Education implemented a process to allow Federal Student Aid (FSA) applicants filling out online applications to go to the Internal Revenue Service (IRS) website to retrieve their income information and transfer it directly to their application,” the White House said in a statement. “This process helps prevent improper payments in the Pell Grant Program by making it easier for students and parents to enter the correct tax return information and receive the correct amount of student aid.”

"The low payment error rate in the Pell Grant program demonstrates that financial aid administrators and the U.S. Department of Education are taking effective steps to eliminate fraud and abuse in the federal student aid programs," said NASFAA President Justin Draeger in a statement. "At a time when Congress is looking to cut federal spending, it is more important than ever to ensure the taxpayer funds invested in the federal student aid programs are being efficiently used to help qualified, low-income students achieve their higher education goals."

The Department's efforts to reduce Pell Grant payment errors is part of the Obama administration’s "Campaign to Cut Waste" and reduce improper payments in federal programs, including Medicare, Medicaid and Food Stamps, by $50 billion in 2012. In Tuesday's conference call, the administration said it has reduced improper payments by nearly $18 billion since the Campaign to Cut Waste was launched in 2010. The Obama administration also announced Tuesday it will also launch new pilot programs to further the progress being made cutting waste and fraud in Medicare and Medicaid.