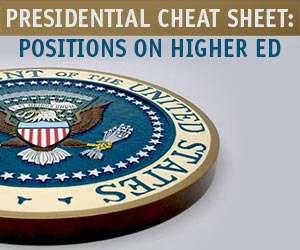 As the 2020 presidential election ramped up, NASFAA continued to closely monitor the candidates as higher education policy positions emerged.

Joe Biden, former Vice President
Biden has been supportive in the past of free community college, as part of President Obama's America's College Promise proposal. In 2015, Biden supported four years of "free college" (Inside Higher Ed), however he now proposes to make community college or other high-quality training programs free. Additionally, he would like to make sure that PSLF is "fixed, simplified, and actually helps teachers." (JoeBiden)

In an exchange with a student during a campaign event in August, Biden said borrowers should not have to make payments toward their loans until they are earning at least $30,000, and loans should not accumulate interest before borrowers begin earning that amount. He also said he would reduce the percentage of income that borrowers repay in income-driven repayment plans from 10% to 5%. (Forbes) in addition to changing the tax code so that debt forgiven through the income-based repayment plan won’t be taxed.

Biden in October released his official plan for higher education, which included doubling the maximum Pell Grant award, automatically enrolling borrowers into income-driven repayment plans, and restructuring PSLF to allow for borrowers to receive $10,000 in debt relief "for every year of national or community service, up to five years" (JoeBiden). Biden has also adopted part of Senator Sanders’ College for All Act of 2017 proposal which would make public colleges and universities tuition-free as well as private HBCUs and MSIs for all students whose family incomes are below $125,000. In April, in the thick of the novel coronavirus outbreak and shortly after Sen. Bernie Sanders and all other Democratic candidates had dropped out of the race, Biden released an updated proposal on student debt relief, which included plans to forgive all undergraduate tuition-related federal student debt from two- and four-year public schools and private HBCUs and MSIs for debt holders earning up to $125,000, with a phase-out for those earning more than $125,000, and canceling a minimum of $10,000 in debt for student loan borrowers dealing with the COVID-19 outbreak (NASFAA Today's News article).

Biden also laid out a plan to invest in grants to under-resourced, private-nonprofit HBCUs and MSIs so they can lower the cost of attendance for low- and middle-income students, as well as invest $10 billion to create at least 200 new centers of excellence that serve as research incubators and connect students underrepresented in fields critical to our nation’s future. Lastly, he will require any federal research grants to universities with an endowment of over $1 billion to form a meaningful partnership and enter into a 10% minimum subcontract with an HBCU, TCU, or MSI and invest $10 billion in programs that increase enrollment, retention, completion, and employment rates. (JoeBiden)

President Donald Trump
President Trump has proposed deep cuts to the Department of Education funding, specifically to student financial aid programs. His most recent budget proposal reiterated his support for hard-hitting cuts to the federal student aid programs and previous proposals have included as much as a $2 billion rescission from the Pell Grant reserve funds. He has also proposed eliminating subsidized loans, Public Service Loan Forgiveness, reducing Federal Work-Study funding, and increasing risk-sharing with institutions. He has supported a more streamlined loan repayment process and shift in the Federal Work-Study allocation formula so institutions would receive funds based on the number of Pell Grant recipients the institution enrolled (The Chronicle of Higher Education). Trump has proposed that student loan forgiveness be made available to all borrowers with undergraduate and graduate student loans who participate in a single income-driven repayment plan, under which borrowers would pay 12.5% of their discretionary income monthly. Under this proposal, borrowers would receive student loan forgiveness of their federal undergraduate loans after 15 years and after 30 years for federal graduate loans. Trump in August 2019 signed an executive order forgiving all student loan debt for any permanently disabled U.S. military veterans. (Fox News)

OTC From the Field: A Conversation With Under Secretary James Kvaal

FAFSA Simplification Implementation: How It's Going and How Schools Are Involved

How the Financial Aid Office Can Help Solve the Enrollment Crisis

OTC Inside the Beltway: Updates on Targeted Loan Cancellation, Promotion of the PSLF Waiver, and NASFAA Preps National Conference Questions for ED