Since the publication of this article, NASFAA has submitted written comments to the Department of Education that mirror its oral testimony. Those comments can be found here.

The Department of Education (ED) kicked off its first of three public hearings yesterday regarding its intentions to begin rewriting a slew of higher education regulations.

ED announced in a July Federal Register notice plans to hold one set of negotiated rulemaking sessions beginning in January 2019 to debate a host of regulatory issues including state reauthorization, the definition of a credit hour, accreditation, TEACH grants, faith-based entities, and innovative learning models, among others. In the notice, ED also announced that would host three public hearings prior to the negotiations, the first of which took place in Washington, D.C. The other two hearings will be held later this month in Louisiana and Wisconsin.

ED also wrote that it would be departing from previous negotiated rulemaking sessions for this particular rewrite by providing draft proposed regulatory language before the first committee meeting. The first session is traditionally structured as a brainstorming session where negotiators finalize the agenda and discuss the issues in depth, and ED provides them with its draft language prior to the second meeting. 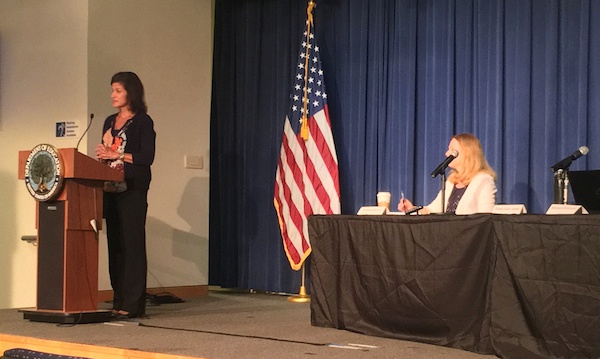 “ED’s new approach deprives all negotiators and ED staff of a thorough, thoughtful discussion of the issues, and undermines the goals of the negotiating rulemaking process,” Karen McCarthy, NASFAA’s director of policy analysis, said at the hearing.

McCarthy also told ED that NASFAA is concerned that “the number and complexity of the topics that this single negotiating team will be expected to address is unrealistic,” a comment echoed by other higher education stakeholders at the hearing.

On the topic of innovative learning models, McCarthy stressed that the federal student aid system needs to be modified to better serve institutions without traditional credit or clock-hour models, which she said is “fundamentally an issue that must be tackled by Congress in the pending reauthorization of the Higher Education Act.”

McCarthy added that while ED is unable to make broad-scale changes for innovative programs due to legislative restrictions, it can allow for “regulatory flexibility” in some areas, such as modifying the time-based restraints associated with the return of Title IV funds and satisfactory academic progress (SAP) requirements.

With regards to state reuathorization regulations, McCarthy asked ED to “tread lightly in matters that are related to state purview, and to find reasonable alternatives that do not price a program out of existence or add unreasonable administrative burden.” She also said that NASFAA believes that ED should continue to recognize the higher education community’s self-regulating initiative for establishing comparable national standards for interstate offering of distance education, the National Council for State Authorization Reciprocity Agreements (NC-SARA), and should use the existing State Authorization Reciprocity Agreements (SARA) process as a model for “reasonable and effective regulation for distance education” for non-participating institutions.

McCarthy also urged ED to improve the administrative process for documentation of TEACH grant requirements to avoid situations in which they are converted into loans.

We need an advocate in DC, really appreciate Karen's comments and hope that NASFAA does not back down. There is too much at stack with our future.

“Concentrating many diverse issues into one negotiating committee renders the consensus approach near impossible..." Unfortunately, that's their goal, in my opinion. Through creating a sensory overload agenda that no one will be able to get through, along with the creation of a committee membership designed to not agree on several important issues, the Department assures itself of no consensus and therefore can issue whatever regulations it wants.