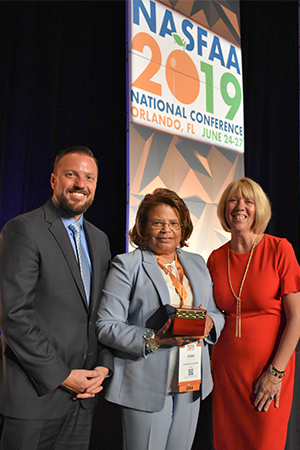 Pam Fowler quit keeping track of all the schools she visited to conduct reviews for NASFAA's Standards of Excellence (SOE) Review Program after about 50, as there were too many to count and she had other things to worry about.

For Fowler, who served as executive director in the Office of Financial Aid at the University of Michigan until her retirement last June, traveling across the country to conduct these reviews was a task that she said aligned with her vocation, even though it normally meant late hours and little sleep, as it was in addition to her normal workload.

As a founding member of SOE and its longest-tenured member, Fowler estimates she has likely been a part of the most reviews and seen the program transform over time.

"Those initial reviews were just grueling because we were still trying to find our way through the program and work out exactly what we were going to say, and how we were going to say it to the institution. It was pretty rough," she said. "And then you come back ... I'd get home on Thursday night and just kind of decompress."

Fowler has seen it all in the field. When she first got her start with what was at the time an upstart committee doing SOE reviews, they did not support certifying financial aid administrators, but wanted to implement a process to show that administrators were capable.

"We came up with this program that we would do reviews to help directors better manage their offices and better manage the financial aid process," she said. Fowler was part of a team that built the program from the ground up, creating the worksheets and writing what would become the framework for what is now known as the formal SOE program.

As time went on and the SOE program began to change, Fowler applied her knowledge of the profession to how she reviewed other institutions, focusing on the people and how they operate as much as the policies and practices.

"It's not just the technical part. It's the evaluation of the office and how the operations in the office are going," she said. "Does the office have a good operational plan? That is what I feel is the most valuable thing of the process."

Fowler cut her teeth in financial aid at a wide range of institutions and in advocacy roles at the state, regional, and national levels, serving as NASFAA's 2011-12 national chair. Just last year she received NASFAA's Lifetime Achievement Award, the association's highest honor.

Above all, though, she said her work conducting SOE reviews was some of her most rewarding.

"It was never about the money. I would have done any of the reviews that I did without any compensation at all," she said. "That was not why I got into the program. That's not why I was devoted to the program. No, it was about helping other schools."

And while she originally did not think she would enjoy retirement very much, describing herself as the type of person who is always doing too many things at once, she has found ways to keep herself busy with various projects and enjoying her newfound free time.

However, she still misses out on some of her favorite aspects of being in financial aid offices and conducting SOE reviews.

Please join us in congratulating Pam and thanking her for her years of service in the comments section below.

you will be missed. Thanks for being such a good mentor and friend And I especially want to thank you for recommending me to be an SOE Reviewer. It is one of the most satisfying things I do!

Congratulations to you Pam - it's a huge loss to the aid community to not have you in this role but completely understandable that retirement beckons- I'd rather spend my time with a puppy too! I'll never forget the feeling meeting you the first time- I knew you were a rockstar even then. But you have always been understanding with all of us in the aid business-showing that speaking ones' mind is not only acceptable but necessary to advance the issues we care about. Heartfelt thanks to you.

Congrats, from the very start of my financial aid career about 30 years ago I heard your name often and saw you at some conferences. I always admired you, thank you for your service in the financial aid world.

Congratulations Pam! It is true what they say: Life really is a journey -- Joining you on so many SOE reviews you always knew which maps to follow and what items to pack for the trip! Most of all the best way to cart all those folders around! No matter where we traveled or what city we were in you knew just the places to visit after work was done! I could not have ask for a better mentor or better "Friend"! Wishing you a wonderful Retirement. So glad to have shared the journey with you. Blessings, Ginny

Congratulations Pam! So many of us here in Michigan have directly benefited from your expertise and guidance through the years. You always jumped in and helped out when I or others made the call and I am truly appreciative of that. I still can't believe you're retired :). Enjoy retirement and throw away the alarm clocks. Thank you for serving the Financial Aid profession and putting it on a pedestal.

So glad you are enjoying retirement! Thank you so much from all of us you helped along the way!

Words cannot express enough my thankfulness for your mentoring and leadership! I will never forget our times at MASFAA SI! Congrats! And I'm glad you are enjoying retirement!

Congrats Pam and thanks for your many years of service to the financial aid profession and your dedication to the SOE program. You have been a friend, mentor and colleague to so many of us. Glad you are adjusting to and enjoying retirement!!!

Congratulations, Pam! I remember working with you on the SOE reviews when I was at NASFAA and you were always so willing to help out whenever needed. You had a deep love for financial aid and it showed. Thank you for all of your years of service!