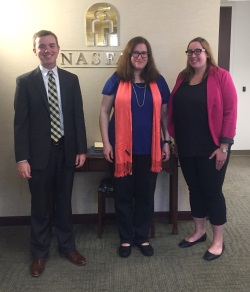 During the meetings, Venezia and Schor applauded the recent Senate appropriations bill that would bring back the year-round Pell Grant, and emphasized the importance of access to student financial aid throughout the academic year. The Pell Grant is very important, particularly to community college students, Venezia said. Having access to that financial aid during the summer semester, she added, would help students in year-round programs who otherwise might be turned away due to the cost.

However, Venezia and Schor also noted that the appropriations bill would set a negative precedent by redirecting some of the Pell Grant Program’s surplus funds to other areas.

“That sets a kind of dangerous precedent,” Schor said. “Putting the funds in places where the mission is totally different is problematic. To take something away from undergraduate students … does not serve the intended purpose at all.” 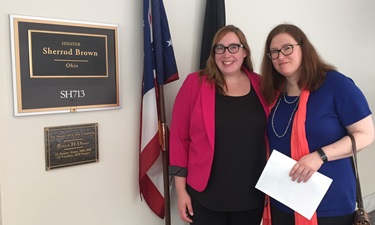 Venezia and Schor also emphasized the need to have information from Pell charts sooner in the year. One goal of using PPY income data on the FAFSA is to give students and families information about financial aid sooner. But as it stands, there will be a mismatch between the time when institutions could send out award letters, the approval of the next year’s Pell Grant funding by Congress, and the publication of Pell charts.

Finally, Schor discussed the implication of student loan origination fees on students, particularly those attending graduate school. Many students do not know that loan origination fees even exist, and many are blindsided when they’re told they need to budget for as much as several thousand dollars more to account for the fees.

“Really, it’s a tax on students,” she said. “Students don’t know what that money is being used for.”

Schor said the fees are a relic from when student loans were not disbursed by the federal government, and should be eliminated, as  Rep. Susan Davis (D-CA) has proposed in her bill, The Eliminating the Hidden Student Loan Tax Act.