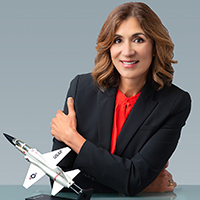 The first Latina to complete the U.S. Air Force Undergraduate Pilot Training and graduate in the top 5% of her class (of 48) with a fighter qualification to fly the T-38 as an instructor pilot, Olga E. Custodio points to three principles that have helped her become successful in a profession dominated by men: overcoming self-doubt, staying open to possibilities, and seeing herself as an equal.

The path to her dream, however, has not been a walk in the park. While studying at the University of Puerto Rico, she tried to participate in the university's Reserve Officer Training Corps program, but was denied the opportunity, as women were not allowed at that time.

But Olga never gave up hope, and she went on to fulfill her dream of becoming a commissioned military officer — and then some. A female military aviation pioneer, she served for 24 years in the U.S. Air Force, retiring as a Lieutenant Colonel. As a pilot instructor, she received an Aviation Safety Award for superior airmanship for her handling of an engine failure in-flight emergency. After transitioning to the U.S. Air Force Reserves, Olga became the first American Airlines Latina commercial airline pilot and was later upgraded to Captain.

Today, Olga is retired with over 11,000 flight hours to her name. Now a speaker and community leader, she works with several nonprofit organizations that advocate for inspiring and empowering students, especially those from underserved communities, to pursue careers in aviation and aerospace. As a STEM advocate, she has also volunteered her time as a speaker and role model at local schools, universities, corporations, and military base groups, encouraging young women and men to reach for their dreams. Olga is a mentor with the Women in Aviation International, Aviation Explorers, and the School of Aeronautics of the InterAmerican University in Puerto Rico, to mention a few. In 2017, she was inducted into the San Antonio Aviation and Aerospace Hall of Fame. Olga recently co-authored the "Latinas in Aviation" anthology and is included as one of the 30 inspiring Latinas/Latinos who have shaped the United States in "Nuestra América," published by the Smithsonian Institution.

By pioneering many firsts during her career, Olga has shattered stereotypes and served as a powerful role model for aspiring to become a pilot. From breaking barriers and overcoming challenges as a woman in a male-dominated profession, Olga has gained essential life insights and perspectives that she shares with everyone, especially women working to achieve their dreams.

Olga lives in San Antonio, Texas, with her husband of 47 years, Edwin — who is also her best friend, supporter, and advocate for everything she sponsors. They have two children, Marcia and Edwin II, and one grandson, Jedi. 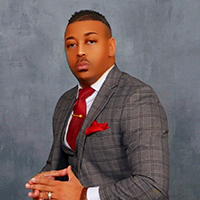 Known as an equity and anti-racist freedom fighter, Dr. Ronald W. Whitaker, II is the appointed culturally responsive pedagogy assistant professor of education and the director of the Center for Urban Education, Equity, and Improvement (CUEEI) at Cabrini University. Further, Dr. Whitaker holds the distinction of being a Schouver fellow at Duquesne University. As a Schouver fellow, Dr. Whitaker engages in improvement projects that seek to build system capacity within organizations. Additionally, Dr. Whitaker is the current Pennsylvania Department of Education (PDE) equity expert, a Board of Trustees member for Tacony Academy Charter School, and a Board of Directors member for the National Association of African Americans in Human Resources (NAAAHR).

As a researcher and scholar, Dr. Whitaker publishes articles that focus on the psychology of race and racism, issues related to diversity, equity, inclusion (DEI), culturally relevant and sustaining pedagogy, and the societal and educational disenfranchisement of African American males.

Dr. Whitaker presents his research at both national and international scholarly conferences, and within K-12 educational milieus. He is revered among colleagues for engaging in tough conversations' in a respectful manner. Dr. Whitaker was a 2018 Delta Epsilon Sigma Faculty inductee, a 2017 Black Theology Fellow at Princeton Theological Seminary, a 2016 American Educational Research Association (AERA) Asa Hilliard/Barbara Sizemore fellow, a 2014 Phi Kappa Phi inductee, and a 2012-14 University Council for Educational Administration (UCEA) Barbara L. Jackson Scholar fellow. Dr. Whitaker is the author of the forthcoming book "HELP(ing) Us to Understand: It's Still Either Going to Be Chaos or Community!"