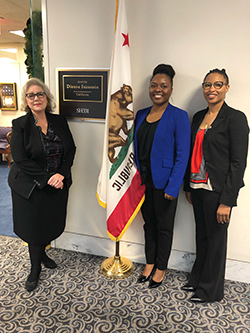 NASFAA members from Washington, D.C. and California institutions met with congressional staff members on Capitol Hill Tuesday to express their support for a new bill to simplify the FAFSA and verification process, as well as to push lawmakers to eliminate origination fees.

During their meetings, the members explained to policymakers how a bill introduced last month would simplify the application, verification and student loan repayment process through better integration with the Department of Education (ED) and the Internal Revenue Service (IRS). Specifically, the bill—the Faster Access to Federal Student Aid (FAFSA) Act of 2018—would allow the IRS to disclose tax return information to authorized ED officials for the purposes of "determining eligibility for, and amount of, federal student financial aid."

Wayne added that while ED created the verification process in order to reduce improper payments to students, there need to be a balance between that goal and the "relief of the administrative burden" for aid offices.

In addition, the members expressed to lawmakers that charging origination fees on loans adds an extra burden on students who are already struggling financially, and applauded members of the House for proposing to eliminate origination fees in their bills to reauthorize the Higher Education Act (HEA), the PROSPER Act and the Aim Higher Act. 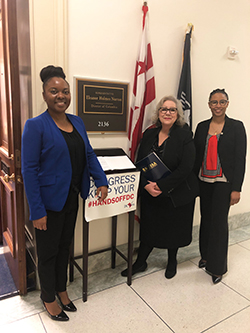 ED originally instituted the fees to defray the cost of subsidies offered to private lenders that issued federal loans, and has continued to collect the fees from students even after private lenders were removed from the process eight years ago. In fact, NASFAA found that ED collected more than $8.1 billion in fees over the past five years.

"To most parents and students, the fees can often be a surprise," Rumsey said. "For students who borrowed $20,000, they are expecting the entire $20,000 applied to them. With these origination fees that doesn't happen."

The members said that participating in the Advocacy Pipeline was liberating and enlightening.

Williams said it's important for financial aid administrators to advocate on the Hill in order to share "the narrative on behalf of the students." Wayne added that "the Advocacy Pipeline is our civic duty to bring to light the challenges at the campus level that our congressional representatives would not be aware of if we don't speak up."

Off the Cuff - Episode 167 Transcript

NASFAA Urges Senate to Take Action to Fix the FAFSA