With the upcoming reauthorization of the Higher Education Act (HEA), lawmakers have increasingly been discussing student financing options. While students and families struggle with student loan debt and repayment, some policymakers have proposed using income-share agreements (ISA) as an alternative.

But the developing idea is somewhat foreign to students and their parents, who appear to be on the fence as to whether they’d like to use an income-share agreement rather than take out a student loan and enroll in an income-driven repayment plan, according to a new issue brief from the American Institutes for Research.

Income-share agreements differ from student loans in that students would be funded up-front by a private investor and pay back to the investor a fixed percentage of their future earnings over a set period of time. By comparison, students paying back loans on an income-driven plan are repaying a fixed sum of money, with a monthly payment based on their earnings.

But once the interviewees were given a more detailed description, seen below in the table for Scenario 2, students slightly preferred loans over income-share agreements, and nearly all parents favored student loans. 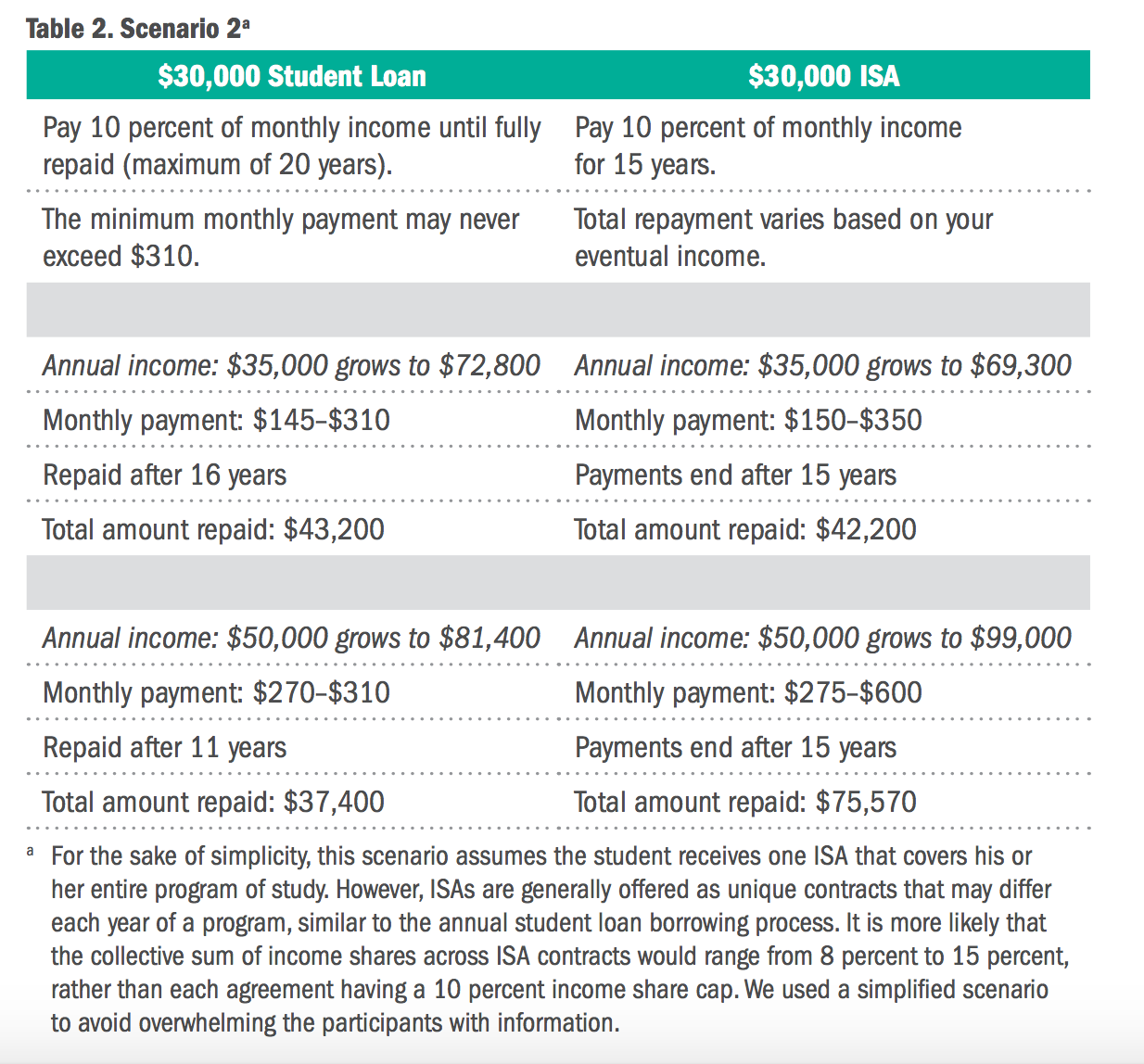 Some of the concerns students and parents brought up surrounded flexibility – being able to negotiate with the investor “and accelerate payment,” according to the brief – as well as being able to manage payments during major life events, such as a medical emergency, job changes, or unemployment. The students and parents also wanted to be able to have a predictable total payment amount, which was more unclear with income-share agreements.

“Students and parents making decisions about paying for college in several years may have a very different set of options than students have today,” the brief said. “The ISA market will likely continue to change. Income-driven loan repayment also may be more prevalent than it is today, particularly if it becomes the mandatory or automatic option as some have suggested. The future of both funding options will be determined by students’ and parents’ knowledge, the quality of ISA funders in the market, and the abilities of ISA funders to distinguish themselves from income-driven loan repayment.”

It does not make sense to me that they use comparisons with different income numbers i.e. 50,000 - 81,400 compared to 50,000 - 99,000. They also do not seem to be accounting for accrued interest while the student is in school. If they were taken at 7500 per year for 4 years there would be about 7500 of accrued interest capitalized upon entering repayment. (assuming single capitalization)

It is very hard to get apples to apples comparisons because of the complexity of the contracts. Is 10% over 15 years really what people are getting? It's hard to imagine anyone with a likelihood of success wanting that.

Why Flunking or Dropping That College Class Will Dent Your Wallet

Report: The Student Loan Default Dilemma Is Not What You Think

Brown Joins Other Elite Colleges Moving Toward “No Loan” Policies

Getting Your Student Loan Forgiven Is a High-Wire Act. Here's How To Do It Right