The Department of Education (ED) on Thursday held the first of two negotiated rulemaking hearings, beginning the process to develop a framework for debt relief for students who feel they were defrauded by their institutions.

Over the last several months, ED has been examining the circumstances surrounding thousands of students who attended Corinthian Colleges, which dissolved earlier this year. In a report released last week, Joseph Smith, ED’s special master for borrower defense, gave an update on progress that has been made toward establishing a path for debt relief, noting that about 12,000 students have submitted requests to have their loans discharged. So far, ED has approved more than 3,000 requests from students who were affected by the abrupt closure of 28 Corinthian campuses at the end of April.

During the public hearing held on Thursday, NASFAA’s Senior Policy Analyst Karen McCarthy spoke about considerations for the negotiators who will be tackling regulations related to a borrower defense system. 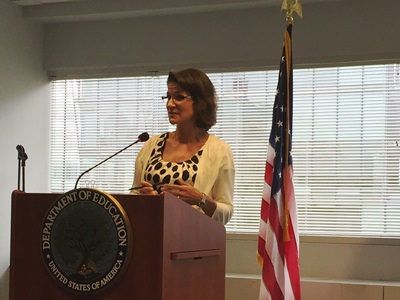 McCarthy said that NASFAA agrees with Smith that if a school is found to have misled students by violating misrepresentation or disclosure rules “on a broad scale,” similar borrower defense claims should be treated “together and alike.” However, any approval of across-the-board loan discharges should only take place after clear evidence of “systemic fraudulent practices” has been established. When students file claims for borrower defense, though, their loans should automatically be placed into forbearance while ED investigates, McCarthy said.

“Discharge of a borrower’s loans is an extraordinary step, and should be reserved for violations involving fraud or substantial misrepresentation that induce an individual to enroll in a program that would afford him or her little benefit,” McCarthy said. “Fraudulent information that significantly inflates student outcomes is a valid reason to consider discharge when program graduates cannot actually obtain gainful employment relevant to the program of study.”

McCarthy added, however, that misrepresentation in other areas that does not affect the quality of the program or employability of the students could justify sanctions against the school, but should not result in a loan discharge.

And when institutions are found to have defrauded or misled students to enroll in certain programs, the institution, as a steward of public funds, bears responsibility to account for losses to public funds. Regulators also must question whether the school should continue to operate.

Finally, McCarthy noted that institutions must be assessed on their “administrative capability” in order to be eligible to receive federal student aid funds.

“A school that is so poorly administered as to not have control over its employees’ fraudulent actions on a widespread scale, probably has serious capability issues that need to be addressed,” McCarthy said. “School closure or denial of student access to Title IV funds is a step that should be imposed very carefully, however, and not as the automatic result of an isolated claim against the school that does not indicate systemic fraud. We believe there is room to explore in this negotiation minimum requirements or benchmarks developed out of the profession to help determine administrative capability and ensure a financial aid office is appropriately staffed and trained.”

Check out NASFAA's Facebook page for more pictures of McCarthy speaking at the hearing!

Off the Cuff - Episode 209 Transcript