Year-round Pell and FAFSA simplification efforts were the focus of NASFAA’s most recent Advocacy Pipeline event on Thursday, where members of the community college sector had the opportunity to advocate Congress on behalf of their students. 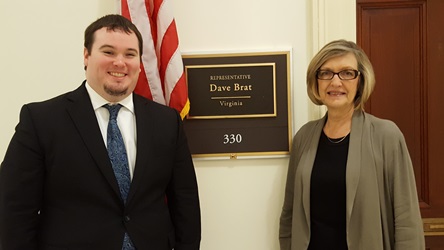 “The community colleges are the economic engines in the towns and cities in which we have campuses,” Dulude said. “It was a really great opportunity to talk with congressional staff members about ways in which we can provide more economic benefits to the communities we serve.”

“Year-round Pell provides an opportunity for our low-income, first-generation students to finish their degrees faster, with less debt, and to get into the workforce sooner,” Dulude said. "Pell Grant funds are investments in our future one student at a time, and if we can help those students finish quicker and with less debt, we’re benefitting everyone."

Zanders and Dulude also discussed future efforts to simplify the student loan process, including eliminating origination fees, codifying Early FAFSA and PPY, and reducing the number of student loan repayment options to two programs: one standard repayment program and one income-driven repayment program that would be the default option for borrowers.

The topic of risk sharing, or “skin in the game,” was also raised during meetings with the staff, where Zanders and Dulude emphasized the need for institutional accountability but cautioned against requiring institutions to pay back a portion of defaulted debt. Such a penalty would ultimately harm students, as the cost would likely be tacked onto the institution’s tuition and fees, Zander said. She said a better way to help reduce defaults and overborrowing would be to grant financial aid administrators the authority to limit loans for certain populations of students and to allow schools to require additional loan counseling when they see a need, both positions that NASFAA has strongly advocated to be included in the eventual reauthorization of the Higher Education Act.