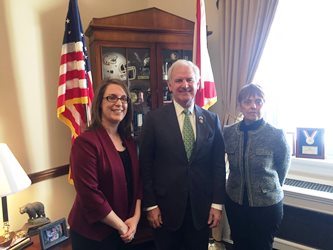 Karen Stinnett of Samford University in Alabama, and Diane Todd Sprague of the University of Texas at Austin met with staffers from the offices of Sen. John Cornyn (R-TX), Rep. Kay Granger (R-TX), and Rep. Bradley Byrne (R-AL), who also joined the meeting.

“What we tried to express to them was the fact that [the budget proposal] will greatly impact access and retention,” Sprague said. “And these are programs which the school is actually supporting, in addition to the federal dollars. So we have skin in the game with this. And right now … Texas is under siege with our legislative session and our budget, and my point was any dollar lost is a bad dollar.”

With regard to the continued outage of the IRS DRT – which officials said could be down for “several weeks” – Stinnett said she tried to impart on staffers the far-reaching consequences of the outage. 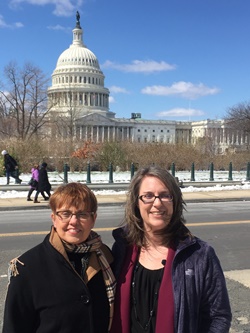 “We tried to explain to them the importance and the impact that it’s going to have on both our families, as well as financial aid administrators – the extra administrative burden in the office, as well as the lack of ease, the lack of simplification that will result for families,” she said.

Stinnett said this was her first time meeting with staffers and representatives on the hill, and that it was interesting to “have a voice in the process,” and “feel like you’re being heard.”

Sprague, who participated in the Advocacy Pipeline previously, said she thinks every NASFAA member should participate at some point.

“It’s so illuminating, and it’s interesting to be part of the process and see how it all works,” she said.