By Brittany Hackett, Communications Staff
For decades, historically black colleges and universities (HBCUs) have provided education for black students and other minority populations. HBCUs, many of which first opened their doors when no other options existed for these communities, serve as landmarks of black history and culture in America. And as the national conversation on higher education turns toward funding for the nation’s colleges and universities, HBCUs and their leaders are joining the fight and speaking up for their students. 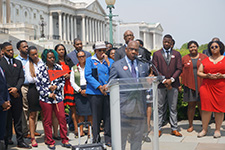 As recently as last week, a group of more than 150 HBCU advocates—including HBCU students, alumni, presidents, and other stakeholders—took to Capitol Hill for a day of action, advocating with lawmakers about the unique needs of HBCUs and their students. The event was organized by the HBCU Collective, a grassroots advocacy group comprised of alumni and supporters of the HBCU sector who are focused on increasing support for sector-specific funding initiatives.
“Our biggest goal is creating an avenue for alumni and students as a special interest group to advocate for HBCUs and on behalf of the schools,” said Dominique Warren, a co-leader of the collective and a graduate of Morehouse College in Atlanta.
Though the distinction of being an HBCU was established in 1965 with the Higher Education Act, many of the nation’s HBCUs have been in existence since just after the Civil War, providing one of the only ways for black Americans to attend higher education at that time and creating a pathway to the middle class. 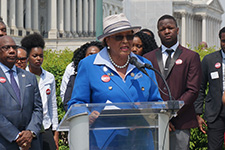 There are currently 107 HBCUs in the U.S., and while they represent only 3 percent of all four-year nonprofit institutions, they enroll 10 percent of all black college students, including 17 percent of all black Americans with bachelor’s degrees, according to data from the United Negro College Fund (UNCF). In fact, 24 percent of all bachelor’s degrees awarded to black students occur at HBCUs, including degrees in high demand fields like science, technology, engineering, and mathematics (known as STEM degrees).
HBCUs are “our way and our ladder to levels and places in America that we still have trouble having access to,” Warren said, noting that HBCUs also produce more black teachers, engineers, doctors, and lawyers than other higher education sectors.
This offer of a “safe space” for black students who may not feel comfortable on other campuses during the current politically charged climate in America can be a significant selling point for prospective students.
“I think that students are wanting an environment that they can be accepted in, that they can feel comfortable and safe in,” said David Page, vice president for enrollment management at Dillard University in New Orleans. “For some, they are doing whatever they can to enroll … and they are trying to make it work because they would rather be in that environment.”
But the success of HBCUs and their graduates is often overshadowed by the struggles they face, which range from small institutional endowments, aging campus and technological infrastructures, and a student body that can include high numbers of low-income and first-generation students for whom paying for college can be a profound challenge, even with federal assistance.
Page said that his institution awards about $6 million annually in institutional aid to students, which is “very generous given our size” of about 1,200 students. However, like many other HBCUs, Dillard does not have a large endowment and other financial supports to help subsidize a student’s educations.
While the cost of attendance at HBCUs is about 27 percent less than at other nonprofit institutions, HBCU students face an unmet need that is almost double that of their counterparts at other institutions, according to UNCF. Data from UNCF shows that 70 percent of HBCU students receive Pell Grants compared to only 39 percent of all undergraduates, and HBCU students borrow nearly twice as much in federal student loans as non-HBCU students, which in 2012 averaged $26,266 versus $14,881.
And when that is not enough, student and families at HBCUs will often turn to the Parent PLUS Loan Program to help cover their unmet need, a program that has generated controversy in recent years due to high levels of borrowing and concerns about whether—and how—some parents can repay their debts.
“We don’t necessarily like to say to parents to borrow money, or to students to borrow money, but what’s the reality?” said David Wilson, president of Morgan State University in Baltimore.  “Who is to say that parent should not do whatever they are going to do to enable that young person to go to college?”
To try to address concerns around PLUS overborrowing, the Department of Education (ED) in 2011 tightened the credit standards for PLUS loans to bring them in line with those of banks, which led to an 11 percent drop in the total dollar amount of federal loans approved for parents during the 2012-13 academic year, according to an ED report on the impact of the changes..
After receiving backlash from the HBCU community, ED hosted a negotiated rulemaking session to try and rectify the issue. The resulting changes modified the definition of “adverse credit history” in the PLUS Loan Program and requires loan counseling for PLUS borrowers with adverse credit who have extenuating circumstances or who have an endorser.
HBCUs are slowly recovering from the dip in their enrollment numbers brought about by the PLUS Loan changes. According to UNCF, over 39,000 students at HBCUs—about 13 percent of all HBCU students—relied on Parent PLUS Loans to meet their college expenses for the 2015-16 academic year, while another 8,600 HBCU students received Graduate PLUS Loans. HBCUs that year received $513 million in Parent PLUS Loan disbursements and $160 million in Graduate PLUS Loan disbursements.
As they look toward the future, HBCU advocates are focused on the upcoming reauthorization of the Higher Education Act, and are planning to have a strong voice in the coming debate on funding for higher education.
During its day of action on Capitol Hill, the HBCU Collective and its advocates pressed lawmakers and staffers on the need for increased financial support for HBCU students, including increases to the Pell Grant, protection for the Public Service Loan Forgiveness (PSLF) program, lower interest rates for federal student loans and reinstatement of year-round Pell, which is looking like a reality if Congress follows through on its tentative budget agreement.
“When we had the one year of year-round Pell, whatever the difficulty [in implementation and administration] paled in comparison to the benefit,” Wilson said, noting that he “strongly” supports reinstating the program, which about 4,000 Morgan State students would be eligible for. “We saw an uptick in our graduation rate and we saw a decrease in our student debt, just from one year.”
The collective is also seeking increased funds for federal research grants, and funding for facility and technology upgrades on HBCU campuses.
Ultimately though, the value of HBCUs cannot be measured in Pell dollars, student loans, or endowments, advocates say. It is measured like much of higher education—in the lives changed and the potential unlocked through education.
“Our worth to this community at large, to this country, is unmeasured,” Page said. “We have produced a lot of individuals who are very significant in the country and who made some great strides and accomplishments to help move America forward. We have provided a space for students who at one point could not go anywhere else, by choice or otherwise, and we have been able to do more with less than any other economic engine in the county and still produce individuals who are succeeding by all odds and means.”

Meeting: President's Board of Advisors on Historically Black Colleges and Universities