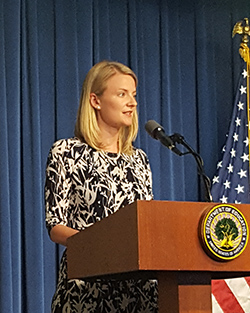 The tale of two regulations - gainful employment (GE) and borrower defense to repayment (DTR) - continued Monday during a day-long hearing at the Department of Education's (ED) Washington, D.C., headquarters regarding its intent to reopen negotiations on the rules in the coming months.

During the first of two public hearings this summer, ED officials heard comments from higher education advocates, leaders, and practitioners on the GE and DTR regulations, ED's decision to delay implementing certain aspects of the rules, and what additional topics ED should consider during the upcoming negotiated rulemaking. The second hearing will take place July 12 at Southern Methodist University in Dallas, TX.

NASFAA Vice President Megan Coval testified on behalf of the association. Regarding borrower defense, NASFAA "supports the intent to hold schools engaging in fraudulent activities accountable. We also believe there is merit in examining the fiscal strength of institutions to ensure that taxpayers are not fully on the hook in case of school closure," Coval said. "However, a finer balance must be struck between holding institutions financially accountable and the federal government potentially pushing them into closure."

To that end, NASFAA is proposing four recommendations for the Department to consider as it moves forward with the new negotiations:

Coval also addressed the renegotiation of GE, testifying that NASFAA "support[s] defining the term, but wish[es] to point out that given the widespread ramification on program and institutional eligibility, it is our strong preference that Congress weigh in on what it deems appropriate to measure whether a program leads to students being ‘gainfully employed.'"

"There has been significant burden on schools to implement this regulation and re-adjudicating it - both in the courts and with new administrations - just adds to more administrative costs, unpredictability, and a diversion of institutional resources away from students," she said.

NASFAA proposed three recommendations for ED to consider as it moves forward on GE:

"Finally, whatever regulations are promulgated related to gainful employment, there must be sufficient implementation time with adequate testing, to avoid the problems that occurred during the last roll-out," McClean Coval said.

The rest of the comments at the hearing were evenly split between those who were opposed to ED reopening rulemaking on the two issues, and those who praised the move as an opportunity to improve the rules from their current form.

Overall, those opposed to the reopening called the move a waste of ED resources with the potential to further harm students who had already been harmed by predatory institutions. Many higher education and student advocates urged the Department to abandon its plans to renegotiate the regulations and instead allow them to be implemented without delay.

"To be perfectly frank, I can't believe we are doing this again," said Alexis Goldstein, senior policy analyst at Americans for Financial Freedom. Renegotiating the regulations is a waste of the Department's time and taxpayer resources, and results in ED "turn[ing] its back on students who have been scammed by the very schools that these rules would hold accountable," she said. Dismantling the rules surrounding borrower defense "will do nothing more than unleash a new wave of waste, fraud and abuse," and if the rules are reopened for negotiation, the Department's "legacy will be damning students to poverty while making executives of for-profit schools into millionaires," Goldstein concluded.

Rep. Mark Takano (D-CA) expressed his "profound concern" with ED's efforts to delay and "undermine" rules designed to protect students and taxpayers, adding that delaying implementation of both rules "abandons the Department's mission" to protect students, not businesses. The decision to delay the rules "will leave many students vulnerable," Takano said. However, he is "particularly concerned" about military veterans, as the decision to delay "puts the interest of companies ahead of that of student veterans," he said.

It was a sentiment shared by several military advocates in attendance.

"I stand here strongly urging this body to stand with students and fully implement the borrower defense rule," said William Hubbard, vice president of government affairs at Student Veterans of America. Hubbard said schools in the proprietary sector "have been having their cake and eating it too, for decades," arguing that further delaying implementation of the borrower defense rule will deprive students and military veterans of the protections they need. "What exactly is up for debate today?" he asked. "Is this Department interested in protecting students or is it interested in protecting companies?"

Jennifer Wang, director of the Washington, D.C., office of The Institute for College Access & Success (TICAS), said that her organization also "strongly opposes the delay, dismantling, or weakening" of either the GE or borrower defense rules. Students "cannot afford a pause in ED's process against waste, fraud, and abuse," she said, adding that delaying the implementation of the GE rule would cost the federal government $1.3 billion over the next 10 years. Instead, Wang urged ED to immediately implement both rules and resolve the outstanding borrower defense claims of students from Corinthian Colleges.

The Department's unilateral decision to postpone aspects of these rules "therefore represents an extreme policy choice that runs counter to the public interest," Barmak Nassirian, director of federal policy at the American Association of State Colleges and Universities (AASCU) said. In fact, he noted, there is "ample evidence" that targeting bad actors would "gradually restore a measure of confidence in the [proprietary] sector," which currently faces years of uncertainty and lack of public trust in the wake of the recent collapses of large institutions like Corinthian and ITT Tech.

There was also significant support at the hearing for reopening negotiations for the GE and borrower defense regulations, with representatives from several "mom-and-pop" for-profit schools telling ED that the current rules unfairly target their sector and may lead some schools to have to close their doors.

Marc M. Jerome, president of Monroe College and a member of the 2013 negotiated rulemaking committee for GE, said that he has spent the eight to 10 years since the committee met "living and breathing" the issues related to GE. "I think most of the speakers who have been speaking on behalf of borrowers [during the hearing] have been conflating behavior of institutions with outcomes, he said. Moving forward, Jerome said he hopes the Department will focus on compiling and using better data to inform its decisions on GE, as well as looking at data "across all sectors" of higher education, which "will inform a much better rule."

The current GE rule is "arbitrarily applied to schools based on tax status," unfairly targeting for-profit institutions," said Charles Long of the Pittsburgh Career Institute. Instead, he said, the rules should be applied to all institutions and programs receiving Title IV funds, and should use lifetime earnings data rather than data for the three years after graduation.

Neal Heller, CEO and president of the Hollywood Institute of Beauty Careers, called the GE rules "ill-conceived and poorly crafted," adding that they do not accomplish their purpose of protecting students. "In many cases, they put good, decent schools out of business," he said. "I think all schools should be judged fairly and equally regardless of our tax status. Judge us on our performance."

"Nothing worth having comes easy, and the regulations that came out of the last session are not only rules worth having, they are rules worth keeping if you want to protect students, families, and taxpayers," said Betsy Mayotte, director of consumer outreach and compliance at American Student Assistance and who was a negotiator during the last borrower defense rulemaking session, said. If the Department decides to continue moving forward with reopening negotiations, Mayotte said she would encourage that the new session "pick up where the last one left off," as there was broad agreement about several keys issues related to borrower defense.