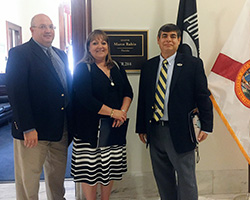 The members – Heidi Hunter-Goldsworthy of the University of Mary Washington, Chad Sartini of Virginia Western Community College, and Francisco Valines of Florida International University  – met with staffers from several congressional offices on both sides of the aisle, including some lawmakers on the House and Senate education committees.

During their meetings, the members emphasized the importance of extending the Perkins Loan program, which expires Sept. 30. The program was in a similar position two years ago, but lawmakers retroactively revived it for another two years, with the assumption that the program would then end. Sen. Lamar Alexander (R-TN), who chairs the Senate Health, Education, Labor, and Pensions (HELP) committee, has been opposed to extending the program again.

Alexander on Thursday said in a statement that the committee will begin the reauthorization process this fall, and that his hope “is that we can move toward a simplified student aid system of one grant, one loan and one work study program.”

Hunter-Goldsworthy said, however, that lawmakers should not “sunset” the program without having conversations about the program as part of the HEA reauthorization.

“To watch the original financial aid program be dissolved because we haven’t had good conversations about it seems counterproductive,” she said.

Likewise, Valines said the Perkins Loan program is also the original “skin in the game” program that policymakers are searching for now.

Valines said the group also discussed issues surrounding DACA with some lawmakers. With the DACA program being phased out, it’s up to Congress to take up the mantle and find a solution for those individuals, he said.

“We encouraged Congress to figure this out so they can continue to become citizens and contribute the way they already do,” Valines said. 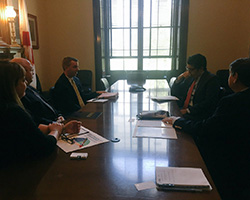 The financial aid community has also been increasingly worried about the future of PSLF, with some lawmakers targeting the program for elimination.

Valines said he emphasized the fact that having the PSLF program is helpful when schools and employers in public service are trying to attract the most talented individuals. Students preparing to work in the government, in the judicial, system, in advocacy or social work, among many other areas, know “they’re not going to be getting those top dollars they could get doing something else,” he said.

“At least with PSLF they know that loan debt is going to get forgiven after they make 10 years of payments,” Valines said.

Hunter-Goldsworthy added that giving mixed messages about the program’s future to students interested in public service is not helpful.

Overall, the group said participating in the Advocacy Pipeline was a worthwhile experience, not just to build relationships with their own representatives, but to hear the perspective of others across the country.

“Answer the call when the call comes,” Hunter-Goldsworthy said. “It’s a valuable experience not only for our students, but also for the director of financial aid and the institution they’re representing. It does bring their issues forward as well.”