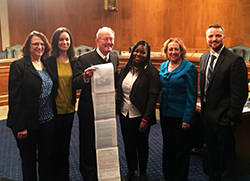 In a rare moment of bipartisan agreement, lawmakers on the Senate education committee on Tuesday discussed how to move forward with ways to simplify the FAFSA as part of a larger reauthorization of the Higher Education Act (HEA).

Members from both sides of the aisle on the Senate Health, Education, Labor, and Pensions (HELP) Committee agreed that it’s time to improve the process by which students apply for federal student aid. It’s one issue within higher education reform on which both Republicans and Democrats tend to agree. And the HELP committee in particular has a history of working in a bipartisan manner to tackle larger issues, such as reauthorizing the Elementary and Secondary Education Act (ESEA), now the Every Student Succeeds Act (ESSA).

Moving forward, lawmakers will need to find a way to modernize the application while balancing simplicity and ease for students with quality assurance and accuracy.

Sen. Lamar Alexander (R-TN), chairman of the committee, said in his opening remarks that starting in January, the committee’s "first order of business" will be to work on the HEA reauthorization, which will include FAFSA simplification. In fact, he said he and Sen. Michael Bennet (D-CO) are working on a bill that would reduce the FAFSA from 108 questions to "as few as 15 and no more than 25," depending on how applicants answer questions about their family and income.

"While experienced financial aid officers tell us it does not take long to complete, we have heard over and over again from parents, students, and higher education officials how difficult it is the first time," Alexander said. "My central focus will be to make it simpler and easier for students to apply for federal aid and to pay their loans back, and to cut through the jungle of red tape that federal law and regulations imposes so college administrations can spend their time and money instead for the benefit of students.

The committee heard from several witnesses about how best to proceed with plans to simplify and improve the FAFSA: Justin Draeger, NASFAA president; Kim Rueben, a senior fellow at the Urban Institute; Nancy McCallin, president of the Colorado Community College system; Judith Scott-Clayton, associate professor of economics and education at Teachers College, Columbia University; and Elaine Genise Williams, a shelter diversion specialist at the YWCA of Richmond.

The panel of witnesses generally agreed that the FAFSA application could be whittled down to ease the burden on students and their families, and that the government could leverage modern technology to achieve some of that simplification. On the extreme end of simplification proposals, Alexander and others have proposed creating a FAFSA application that has as few as two questions — an idea dubbed the "postcard FAFSA." While the idea shows that the most important information about aid applicants can be easily acquired, it also leaves room for limited amounts of financial aid to be ill-targeted. A slightly more complex approach, some witnesses said, could make the FAFSA less complicated, but still accurate.

Draeger, for example, explained how NASFAA’s proposed three-level application process would rely on a "robust" and expanded IRS Data Retrieval Tool (DRT) that would include all line items of the 1040 and W-2 tax forms. That expansion would allow the DRT to include information on other forms of income, such as business and investment income, without requiring the applicant to submit that information manually. It would also set up the three-pathway approach in NASFAA’s FAFSA simplification proposal.

"In order to strengthen the FAFSA for those who need it the most, we will need to work to balance the tension between simplification and accuracy, and be willing to accept that there might be some imperfection in pursuit of balancing these goals," Draeger said in his prepared remarks. "Creating an application process with these three tiers does create some complexity, but not for the applicants. The complexity in programming, indexing tax returns, and transferring that data over to the Department of Education is all on the backend. And we ought not eschew complexity on the backend if it helps us maintain integrity and accuracy in the program and prevents more states, schools, and private scholarship providers from developing their own forms."

Rueben suggested decoupling the awarding of Pell Grants from the rest of the financial aid system. Eligibility for receiving a Pell Grant, she said, could be determined using a limited amount of information, such as family income, family size, and family relationships. A "separate, universal" application for other aid would rely on a "branching system" to simplify the process. Similar to other proposals, Rueben said the applications should be mobile-friendly, and should allow for the transfer of data directly from tax returns.

"It is an auspicious time to continue simplifying how potential students apply for financial aid," she said in her prepared remarks. "While simplification could increase costs … these costs represent new opportunities for potential students who may have felt that higher education was unattainable."

Other witnesses noted that simplifying the FAFSA could address other issues within higher education, such as increasing and improving college enrollment, completion, and outcomes; addressing administrative burden through decreasing the need for verification; and helping improve access for nontraditional students, such as those struggling with homelessness.

Elaine Genise Williams, for example, struggled with homelessness throughout college and said the FAFSA was a huge hinderance in completing her education, due to having to repeatedly explain and provide documentation on her situation to college administrators and others.

"While the FAFSA was my number one hurdle in completing my education, I had other challenges, especially housing and mental health services," she said. "In spite of the many obstacles, I made it to the finish line."

The Senators should also look into the 529 Bill, introduced by Rep. Lynn Jenkins (R).
This bill will allow the repayment of student loans using 529 Educational plans.