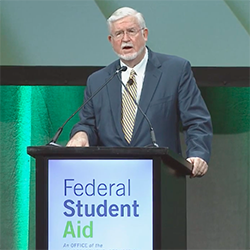 A. Wayne Johnson, chief operating officer of the Department of Education's (ED) Office of Federal Student Aid (FSA), unveiled detailed plans for a mobile FAFSA app Wednesday at the FSA Training Conference, the first of many steps he said the office is taking to improve its customer experience.

Johnson said that creating the app is part of an effort to transform the federal student aid system into a more standardized and user-friendly network, or, as he dubbed it, into the ‘Next Generation Financial Aid Services Environment.'

"The FSA Next Gen environment is the next major milestone in the administration of federal financial aid and how students empower their educational dreams," Johnson said in a press release. "FSA is reimagining how it serves its customers throughout the student aid life cycle to ensure student borrowers are engaged throughout the process and have the information they need to make informed decisions."

Secretary of Education Betsy DeVos hinted at the prospect of a mobile app yesterday to more than 5,000 financial aid professionals on the first day of the conference in Orlando, Florida.

"This overhaul is long overdue," DeVos said. "Students and their families should be treated like the valued customers they are and should have access to the tools needed for success. Today's announcement is a significant first step in our commitment to improving the experiences students, parents and borrowers have with FSA and in bringing federal student aid programs into the 21st century."

On the second day of the conference, Johnson, who joined the FSA this summer, delved into the much anticipated specifics of the app, which he said would be available by spring 2018.

The current system, according to Johnson, is "highly fractured," has "multiple engagement points," and is "quite frankly, something that takes a lot of investment of time to understand in its totality."

With the mobile app, called myStudentAid, students and parents would be able to fill out FAFSA forms on their phones, and invite each other to complete certain parts of the form through a messaging system on the app. Students and parents could also switch back and forth between their phones and computers while filling out the form. Students would then be able to sign their forms with their fingertips on the face of their phones.

After completing the form, students would instantly know what their Expected Family Contribution (EFC) is and the amount they would be eligible to receive in Pell Grant.

But it doesn't end there.

"It's not just the FAFSA mobile, it's gonna be a totality of student aid experience, self-serviced, and other things added to it, delivered on a mobile basis," Johnson said.

The app would allow students to access information about their loans, set up payment plans, and fill out and update checklists created by themselves, schools or FSA. Another feature of the app would offer schools the option to input information specific to their students.

The app also aims to improve students' financial literacy. It would allow them to check their credit scores each month for free, as well as freeze and unfreeze credit reports.

"Let them understand what is happening to their financial future," Johnson said.

Johnson also unveiled a mobile debit card on the app in which both parents and schools can deposit financial aid money. The app would monitor how and where the money was spent.

ED Inspector General Kathleen Tighe told members of Congress earlier this month that $6 billion in improper payments were made in 2016 by way of the Pell Grant and Direct Loan programs. Johnson said this tracking ability is "an important element in addressing the root cause of improper payments."

While all other modalities will still be available, Johnson said he hopes that by the next FAFSA cycle, "a lot of people will be executing the FAFSA by way of mobile."

What kind of security measures are being taken when developing this app? People loose their cell phones all the time. Is the student going to have to log into the app with their FSA ID every time they want to use the app?

If not, the stranger that happens to pick up that lost cell phone could access a students entire financial aid history, credit report, change the persons loan repayment plan, etc.

I'm definitely in favor of improving customer service.. but this idea has me concerned.

FAFSA Simplification: Planning for the Future

Is Verification Waived For the 2023-24 Award Year?

Is an Incarcerated Student, Spouse, Or Parent Required To Complete Verification and Submit Documents?

Why Are We Seeing an Increase In V4/V5 Verification Selections In Spring-Summer 2022?

Are There Exceptions To Resolving Conflicting Information?

How Do We Implement the Verification Waiver For the Remainder Of 2022-23?

Do We Need Both Sides Of a Government-Issued Identification For Verification?

Is Someone Who Is Only Receiving Pandemic Unemployment Assistance Required To File a Tax Return?

If Schedule 1 Line 8 Is Negative Unemployment Compensation, Do You Still Answer No To the Schedule 1 Question?

Do the COVID-19 Verification Flexibilities Apply To the 2022-23 Award Year and Beyond?

When Separating Income and Using the Tax Table Method, Do You Subtract Education Tax Credits To Get Taxes Paid?

How Will the ID.me IRS Registration Process Affect Verification?

If an Individual Already Filed a 2020 Tax Return, Is an Amended Tax Return Required To Claim the Unemployment Compensation Exclusion?

How Are Coronavirus-Related Retirement Distributions Reported on the FAFSA?

How Do We Determine the Correct Tax Filing Status?

More Students Will Qualify for Federal Student Aid on October 1, and It's a Big Win for Students and Families

How Do We Treat Income Earned From Work For a Foreign Nontax Filer?

‘It’s Night and Day’: How the Verification Waiver Is Helping Students and Aid Offices Breathe a Temporary Sigh of Relief

Is There a 2020 Tax Return Comparison Tool To Assist With Verification and Professional Judgment?

How Do We Account For the Unemployment Compensation Exclusion On 2020 Tax Returns?

Off the Cuff - Episode 200 Transcript

How Do We Implement the Verification Waiver For the Remainder Of 2021-22?