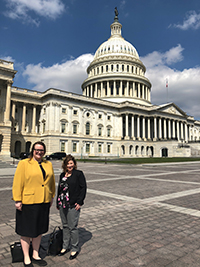 NASFAA members from Minnesota and Missouri institutions met with congressional staff members on Capitol Hill Tuesday to advocate on behalf of the Public Service Loan Forgiveness (PSLF) program, and to shed light on the extra burden that loan origination fees place on students.

During their meetings, the members emphasized that the uncertainty around the future of PSLF, which the Trump administration as well as House Republicans proposed to cut, has been extremely challenging to students deciding whether to pursue careers in the public sector.

Further, the members argued that PSLF should not be eliminated because there is not enough data available on the outcomes of the program; this fall was the first time that borrowers were eligible to apply to receive forgiveness under the program after making 120 monthly payments.

Boling said that instead of cutting the program, lawmakers should look to “put some boundaries around it.”

“I don’t want to eliminate the program just based on speculation,” she said.

In addition, the members expressed to lawmakers that charging origination fees on loans adds an extra burden on students who are already struggling financially, and applauded members of the House for proposing to eliminate the fee in their HEA bill, the PROSPER Act.

The Department of Education (ED) originally instituted the fee to defray the cost of subsidies offered to private lenders that issued federal loans, and has continued to collect the fee from students even after private lenders were removed from the process eight years ago. In fact, NASFAA found that ED collected more than $8.1 billion in fees over the past five years.

“There is a complete lack of transparency there,” Boling said. “We want every dollar to get into the hands of our students.”

Basballe, who works primarily with medical school students, said the origination fee as high as 4 percent on Grad PLUS loans is “really hard for students to swallow.”

“It’s a hidden cost to students who are just trying to pay for their education,” Basballe said. 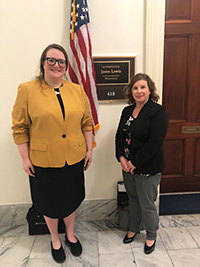 The members also discussed how another proposal in the PROSPER Act to mandate annual student loan and Pell Grant counseling may place too much of a burden on schools with large student bodies, and instead suggested that institutions be allowed some flexibility in deciding when to require loan counseling and for which population of students.

“We have 28 staff [members] in our office. It’s difficult to have meaningful conversations with more than 30,000 students,” Boling said. “Having some flexibility to decide what’s best is what we're really looking for.”

Overall, the group said participating in the Advocacy Pipeline was empowering and exciting.

“It was an opportunity to really use all of the information that we share day in and day out with our students and put their voice in front of the legislators who are making decisions about higher education and funding,” Basballe said. “This was such a great opportunity to advocate for our students and try to make an even greater difference in their lives at a higher level.”

Getting rid of the origination fees would be a blessing to both schools and the students because it affects the disbursement dates and causes unneeded work at the institution to cancel and re-originate loans originally set to disburse prior to the October 1 date created by the sequester. And it would benefit the student because you don't have to explain to them why when they requested $1000 they're only receiving $990.

getting rid of originations fees on loans is more important now than ever since interest rates on loans will begin to go up with the improved economy.

Limits on PSLF are needed. What will kill this program is when the elected officials and the public see an inordinate amount of the forgiveness is going to physicians with incomes in the top 2% of the country. As for yearly counseling, I think yearly on-line loan counseling is necessary. Students are graduating with no idea on how much they borrowed or what their repayment options are.