NASFAA members from Illinois and Connecticut institutions met with congressional staff members on Capitol Hill Thursday to thank lawmakers for increases in funding for student aid programs, as well as urge them to improve the verification process and cut origination fees.

The members—Michelle Cornell from Illinois State University and Carrie Fernandes from the University of Connecticut—met with staffers from several congressional offices on both sides of the aisle. 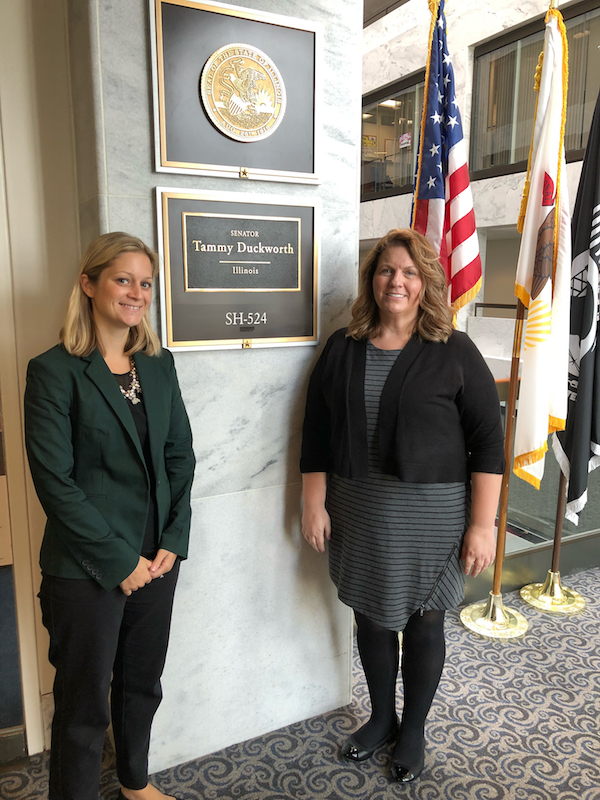 During their meetings, the members expressed their support to lawmakers for increases to the Pell Grant included in the fiscal year 2019 spending package that was conferenced by House and Senate committees last week. The bill, which was passed out of the Senate earlier this week and is awaiting a vote by the House, would raise the maximum Pell Grant in award year 2019-20 by $100 to $6,195. The members also thanked lawmakers for their continued support of the Federal Work-Study (FWS) and Federal Supplemental Educational Opportunity Grant (FSEOG) programs, which the agreement would level-fund at $840 million and $1.1 billion, respectively.

“It would allow us to help more students and help our neediest students,” Fernandes said. “With the ever-rising costs of education, every dollar helps to close gaps for students and families.”

The members also urged lawmakers to fix the verification process for students filing the FAFSA, which Cornell told lawmakers has continued to be a “complicated process that creates hurdles for students.” Cornell said that her students have had issues with not being able to access the Internal Revenue Services’ (IRS) Data-Retrieval Tool (DRT) consistently to input their tax information directly into their FAFSA.

“Simplification of those processes would allow students to focus on school,” Cornell said.

In addition, the members expressed to lawmakers that charging origination fees on loans adds an extra burden on students who are already struggling financially, and applauded members of the House for proposing to eliminate origination fees in their bills to reauthorize the Higher Education Act, the PROSPER Act and the Aim Higher Act.

The Department of Education (ED) originally instituted the fees to defray the cost of subsidies offered to private lenders that issued federal loans, and has continued to collect the fees from students even after private lenders were removed from the process eight years ago. In fact, NASFAA found that ED collected more than $8.1 billion in fees over the past five years.

“It can be confusing for students when they think they are borrowing a certain amount,” Fernandes said.

The members said that participating in the Advocacy Pipeline was important and informative.

“It was a great opportunity for us to provide a perspective as financial aid administrators, and do whatever we can do to help streamline the process [of applying for and receiving aid] for students,” Fernandes said.

Cornell said she would encourage other members to participate in this initiative.

“We get siloed in our work. It’s important to advocate for our students and to stay involved,” she said.

Thank you for your time and willingness to represent our students and our campuses. Advocacy matters!