Higher education stakeholders convened in Washington, D.C. Tuesday to begin the first of three sessions of negotiated rulemaking, or “neg reg,” to consider changes to the federal regulations on accreditation and other issues based on draft regulatory language released earlier this month by the Department of Education (ED). Before jumping into the draft regulatory language, negotiators spent this first day debating procedural changes ED has implemented to this first session and working to reach consensus on session protocols.

This session was originally slated to take place over three days, but was shortened to a day and a half due to a snowstorm that hit the area over the weekend.

ED representative Annmarie Weisman kicked off the day by explaining that ED has adopted three changes to “simplify the process to get to consensus.” For example, in a departure from past negotiations, in which the first session has generally been a brainstorming and listening session, ED has already released its proposed draft regulatory language for the regulations. 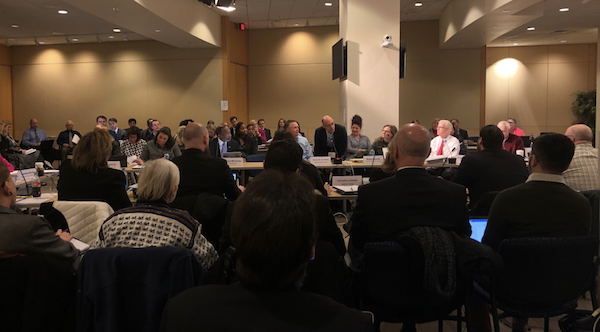 Additionally, as opposed to asking negotiators to reach consensus on the entire regulatory package, ED said that it grouped together items for consensus into three “buckets” based on topics. This is significant because without consensus, ED is free to write proposed rules as it sees fit, even if there was agreement within the group on regulatory language on individual issues. With issues being grouped together, if the negotiators reach consensus on one bucket, the language they agreed on from that bucket will be the proposed rule in the Notice of Proposed Rulemaking (NPRM), regardless of whether they reach consensus on the other buckets of issues.

Although the committee has not yet finalized the list of topics to be negotiated, the first bucket will tentatively include accreditation, credit hour, and the Robert C. Byrd Honors Scholarship Program; the second bucket will be comprised of the Teacher Education Assistance for College and Higher Education (TEACH) Grant program and faith-based entities; the third bucket will cover distance education, state authorization, and competency-based issues. While some negotiators expressed concerns about the topics that were grouped together, they overall agreed to breaking up the topics into buckets, and adding language to the protocols that ED will establish the groupings “with the opportunity to discuss and the department to change the groupings during the course of the proceeding.”

Lastly, ED created subcommittees ahead of this session—as opposed to negotiators requesting them during the session—to address some issues on the agenda. Subcommittee sessions on distance learning and educational innovation, TEACH Grants, and faith-based entities—which are not open to the public but will be livestreamed—will take place January 17-18. Stay tuned to Today’s News for coverage of those discussions.

Negotiators also entered into a lengthy debate around whether to add a representative to speak to the states’ interest on accreditation via a state attorney general and/or a member of the State Higher Education Executive Officers Association (SHEEO). Negotiators in favor of inclusion of a state higher education agency representative relied on the position of state agencies as a crucial component to the higher education triad, consisting of ED, accrediting agencies, and state agencies. Negotiators in favor of inclusion of a state attorney general argued that they present a consumer protection perspective not adequately represented at the table. While many negotiators were opposed to solely adding an attorney general, a few more were open to allowing a member of SHEEO to serve as a primary negotiator and an attorney general as an alternate negotiator. ED responded that it intended that the negotiator representing legal assistance organizations helping students, Robyn Smith of the Legal Aid Foundation of Los Angeles, would speak to consumer protection interests, however Smith said that she was concerned serving as the sole voice for this interest. This debate was tabled until tomorrow

Having concluded with a consensus on ED’s protocols, as modified by the committee, negotiators will pick back up tomorrow, which will mark the conclusion of this first session.

Off the Cuff - Episode 103 Transcript