Three weeks after resigning from the Department of Education’s (ED) Office of Federal Student Aid (FSA), calling the federal student loan system “fundamentally broken,” and announcing a Republican bid for Senate on the platform of student debt forgiveness, A. Wayne Johnson sat down Thursday to explain what led him to leave his post and detail his plans for the future.

While presenting the “conservative case for debt forgiveness” at an event hosted by the American Enterprise Institute (AEI), Johnson, who formerly served as FSA’s chief operating officer (COO) before switching early last year to lead its new Strategy and Transformation unit, argued that in order to prevent more government money from being spent through a loan system that is not working, lawmakers need to first make amends to those who are currently struggling. Johnson late last month abruptly announced his departure via an article in The Wall Street Journal, and simultaneously revealed his plans to run for Sen. Johnny Isakson’s (R-Ga.) seat, which will be vacant when he retires next month.

Earlier this week, presidential hopeful Sen. Elizabeth Warren (D-Mass.) and House Majority Whip James Clyburn (D-S.C.) sent a letter to Education Secretary Betsy Devos and FSA COO Mark Brown demanding more information about Johnson’s claims that the federal student loan system is beyond repair and the data that led him to conclude that “much of the debt will likely never be repaid."

“The public conclusions of Dr. Johnson, a top federal student loan official in the Trump administration until he resigned, represent a stunning departure from the policies of this administration," they wrote. "This sudden shift in policy position raises serious questions for lawmakers, borrowers, and the public as to what informed this change, what other [ED] officials are aware of this information, and how this information informs ongoing work at [ED] after Dr. Johnson's departure."

When prompted with the same question on Thursday, however, Johnson could not pinpoint one — or even a few — issues that caused him to deem the federal loan system “broken.” Instead, Johnson listed a slew of frustrations ranging from high interest rates and rising tuition costs to complex repayment programs and the tax burden of forgiveness programs. 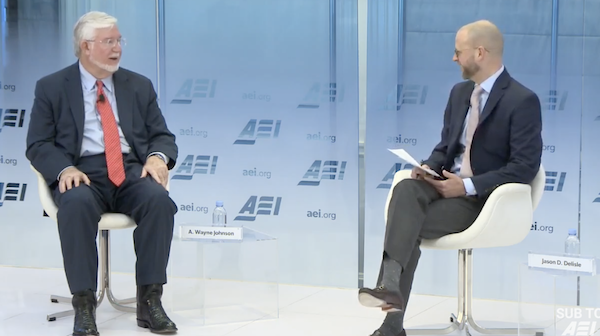 Johnson’s biggest concern, however, was the “runaway outflow of money” being granted in the form of what he called “unorthodox grants and loans” by the federal government.

“It’s not a waste of money to invest in America, but we’re not deploying money in a transparent way,” he said. “... The conservative case that I’m building, or hope to be building here, is that we must stop making unlimited amounts of money available through loans. If we’re going to stop that, part of the bargain, quite frankly, is … we should relieve from an equity standpoint an equal amount of money that’s already on the books.”

Detailing his proposal for debt forgiveness, which he only hinted at to The Wall Street Journal last month, Johnson said he envisioned a federal student aid system without federal student loans, and that Republicans are going to have to “basically accept [that] were going to do a level of debt cancellation in exchange for putting a lid on this thing in a go-forward basis.”

Johnson, while reading directly from his cancellation proposal that he has yet to publish, explained that he would give every high school senior a $50,000 grant to be used toward their higher education, which could be paired with the Pell Grant, and forgive up to the same amount in loans for those who had already taken out money from the government. He also proposed some form of income-based repayment plan and a tax credit of $50,000 for those who had already paid off their student loans.

In addition, Johnson briefly discussed a plan to establish a federal income-share agreement (ISA) to account for costs above $50,000, which he said would eliminate $1 billion in loan servicing costs but might be “complicated” for the Internal Revenue Service (IRS). To institute a federal ISA program, Congress would have to amend the IRS code.

“There’s nothing more simple in execution than a federal ISA that’s getting paid back by way of you filing your tax return,” he said.

While Johnson’s plan would, by nature, reward students from wealthier families along with those from low-income families, he argued that “at the end of the day, this is equity for all.” He also noted that we need to start thinking of students who are 18 years old and older as “fully emancipated” and that “we need to deal with them fully independent of their family situation.”

Johnson estimated Thursday that his plan to award $50,000 grants would cost about $140 billion each year and would be funded by a corporate tax, arguing that higher education has provided corporations with a skilled workforce and that it is time for them to “basically pay for having had that ability to tap into that labor pool.”

With regard to his debt forgiveness proposal, Johnson claimed that “we can eliminate every bit of money that is on the books right now and we don’t have to raise a cent in tax to deal with that.” He added that he was not sure what the added costs would be of potentially more students enrolling in higher education due to the grant.

“When you get into the numbers, what you’ll find is that this is administratively doable and quite frankly highly affordable,” he said. “If we Republicans don’t take this on, It’s going to exacerbate and become much, much worse.”

A $50,000 grant "to every high school senior?" Meaning that non-traditional students, which make up the majority of those enrolled in higher ed in this country today, along with all graduate students, are eligible for zero federal aid? And what on earth is so "unorthodox" about the existing programs? And treating all 18 year olds as financially independent helps who the most? Rich kids whose parents can easily afford to send them to any college.

There are several different flavors of debt cancellation being floated around now, among presidential candidates and others. But Mr. Johnson's "put a lid on this thing" flavor is poison pill, and no thank you, I don't like that flavor.

Off the Cuff - Episode 239 Transcript

More Than A Moratorium: How the Biden Administration Has Implemented Student Loan Relief

A Year in Review: The Biggest Financial Aid News of 2021

Simplified Payment Qualifications, Reduced Barriers to Forgiveness, and a Second Chance for Denied Applicants: How the PSLF Overhaul Will Impact Borrowers

State of Impending Emergency: How Recovery From the Pandemic Could Complicate Student Loan Repayment