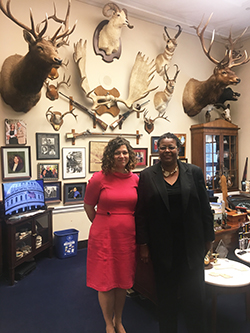 NASFAA members from Tennessee and Alaska institutions met with congressional staff members on Capitol Hill Tuesday to encourage lawmakers to tie Pell Grants to inflation and protect the Pell reserves, as well as express their support and concerns for certain provisions included in the House Republicans’ bill to reauthorize the Higher Education Act (HEA).

The members — LeChelle Davenport of the University of Tennessee Health Sciences Center and Sonya Stein of the University of Alaska Anchorage — met with staffers from several Republican congressional offices, including those tasked with drafting bills to reauthorize the HEA.

During their meetings, the members emphasized the need to reinstate the practice of automatically adjusting Pell Grants to inflation, which was abandoned for the 2018-19 award year for the first time in five years. Stein said this would give both institutions and students “some degree of stability year-to-year,” and Davenport explained that it would help institutions avoid having to adjust their award letters, as they did this year. They also urged lawmakers to protect the Pell reserve from cuts in the case of a presidential rescission, where the president has the ability to retroactively redistribute funds allocated to programs in the omnibus bill.

With regard to reauthorizing the HEA, the members expressed their support to lawmakers for various aspects of the House Republicans’ bill, the PROSPER Act, such as the elimination of origination fees and the ability for institutions to limit loan amounts.

“The loan debt at the end of the four-year period is so much, and students tend to borrow more than they need,” Davenport said. “They aren’t looking down the road.”

The members also told lawmakers that they appreciated the proposal to maintain full-time enrollment status at 12-credit hours per semester, with the option for a Pell bonus for those who take 15 credits.

Davenport also told lawmakers, however, that the PROSPER Act proposal to cut Grad PLUS loans would cause graduate students to struggle to fund their education because “students typically need the unsubsidized loan and some additional Grad PLUS loans to cover all their needs.”

The members also discussed a trend their students were experiencing in which solicitors were posing as loan servicers or Department of Education (ED) representatives and telling students they need to pay them in order to be put into forbearance, which is actually free of cost to borrowers. Stein said she wanted lawmakers to be aware that these cases are becoming more and more common.

“We want to establish trust... It's hard to do that when students are getting all these other solicitations,” Stein said. “When they do get something from their servicer, it just feels like noise to them.”

Both members agreed participating in the Advocacy Pipeline was beneficial and rewarding.

Stein noted that it is incredibly important to build relations with representatives and staffers to situate financial aid administrators as points of contact for them on future issues. The pipeline is also a good opportunity, Davenport said, to discuss with lawmakers the proposals you support and what your concerns are moving forward.

“It’s good to know where your state representatives stand, meet with people face to face, and get an understanding of what’s going on in Washington,” Davenport said.