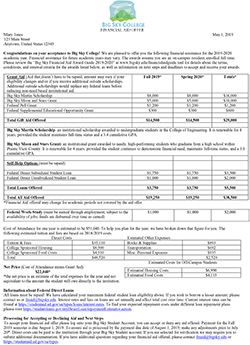 Last month, Sens. Chuck Grassley (R-IA), Tina Smith (D-MN), and Joni Ernst (R-IA), introduced the "Understanding the True Cost of College Act," a bill created to standardize financial aid offer forms, by mandating the use of standard language and a standard format, as well as multiple other items. Financial aid award notifications have recently become a popular and controversial issue among lawmakers, as college accountability and transparency become key focuses of conversations revolving around reauthorizing the Higher Education Act (HEA). Last summer, NASFAA's Board of Directors voted to support legislative strides to develop a set of common, consumer-tested terminologies, definitions, and specific elements to be on every award notification, rather than full standardization.

To create the form, the Department of Education (ED) would be required to consult with representatives from each higher education sector, as well as financial aid experts, veterans and servicemembers, students and their families, and school counselors, among others.

The bill would require certain standardized items to be included on the first page of the award offer and in the same order. The items would include cost of attendance, made up of listed direct and indirect costs, tuition and fees—which must include an indication of the academic year they are based on, housing and food costs, as well as a total for other expenses which would, at a minimum, need to include a total for estimated costs for books, supplies, transportation, and miscellaneous other expenses. Schools would also need to provide estimated costs for housing and food for off-campus students.

The bill also sets strict standards for the way financial aid and enrollment information can be displayed on the first page of the award offer. Grant or scholarship aid would need to be listed separately with its own heading, with multiple disclosures about the student's eligibility for the aid, including a disclosure that grant aid doesn't need to be repaid, how they can maintain or renew the aid from year to year, and how the aid can change if the student receives additional outside scholarships. The standard form would also need to inform the student of what enrollment status the aid they're receiving is based on, and that the financial aid offered may change from year to year.

Under the bill, Federal Work-Study (FWS) would not be allowed to be included in the financial aid category, and must have a disclosure associated with the award that tells the student that FWS is subject to the availability of qualified employment opportunities, and that it is paid out over time, when earned.

The bill also stipulates the way information about loans must appear on the financial aid offer. The award name would need to include the clear use of word "loan" and if applicable, would need to clearly differentiate between subsidized and unsubsidized loans. Federal PLUS loans, both Parent and Grad, can only be included as "additional funding options" on the award offer, and if the institution chooses to include them, it cannot include suggested borrowing amounts. Included on the first page with the loan section would be two disclosures stating that loans need to repaid and that the student has the ability to borrow less than offered, as well as information about how interest rates are determined, and a link to an ED website that lists the current rates.

Similar to Federal Direct Parent and Grad PLUS loans, private loans cannot be listed with an amount on the award offer and, if mentioned, must state that students should consider using their available federal student loan eligibility before the use of a private loan, and an explanation that federal loans often provide more favorable terms and repayment options.

The bill calls for significant consumer testing to be conducted after the draft form is created. The draft would be tested among multiple representative groups of students and families as well as institutions of higher education and school counselors. The draft would also be consumer tested at schools that would include up to 24 institutions reflecting diversity in institution type and geography. ED would be required to use the results of the consumer testing in the development in the creation of the final form.

The Understanding the True Cost of College Act differs from NASFAA's proposal for award notifications, which recommends standardized terminology and elements, rather than full standardization.  NASFAA created several examples to help institutions envision how an award notification would look under its recommendations.  Because the bill requires a significant amount of information on the first page of the award offer, NASFAA created a mock version of how the template could look and is included below.

At least one other screwy thing here is that "total aid" includes work-study, but comes before work-study in the sequence.

Perhaps proving just how difficult the challenge is of representing this both clearly and comprehensibly on 8.5x11, even in the simplest scenario (Semester school, no summer, relatively few award lines) using an eye-bleeding font type in 11 point.

Similar to Angela's point, we're a quarter institution - a format that works for a F/S semester school may not work well jamming 5 columns of data in (4q + total) into it.

Personally, while some action seems inevitable, I'd like to see any initial laws crafted towards traditional 4 year students. That's where most of the research to date falls, and also where most of the political interest falls. They're also the most likely to offer meaningful on-campus housing.

Dragging other sectors along in a singular effort I think is going to lead to some non-optimal outcomes.

I'm all for transparency. I'm all for providing thorough and clearly worded information. But if anyone thinks that this template - which frankly, closely resembles if not duplicates many award letters already out there - will suddenly make this whole process less confusing and less stressful for students and families, they're going to be pretty disappointed. There's so much in this model that will still leave students and families with no idea exactly what their final cost will be, and that's pretty much unavoidable for 101 reasons, at least 99 of which aren't going away anytime soon.

Let's put standardized language in place and see where that gets us. These senators are well intentioned, and it's almost a novelty to see a reach across the aisle for things like this, but they have to realize that one size never fits all...often, the more you play with it, it comes closer to one size fits none.

Also interesting to see Senator Smith working on this...she took over for Senator Franken, who introduced a similar bill a few years ago.

Standardized terms I get. Standard award letters - no. I can see certificate schools less than an academic year being accused of misrepresentation because the FAFSA estimate is obviously higher than the pro-ration calculations we are required to do. And not all colleges/programs have only fall/spring starts.

Is There a De Minimis Amount That Is Allowable Without Having To Count a Resource As Estimated Financial Assistance?

Can We Round Clock Hours Up When Determining If the Student Completed the Payment Period?

How Are Excused Absences Treated When a Student Completes A Clock-Hour Program Early and Aid Must Be Prorated?

How Is Athletic Name, Image, and Likeness Compensation Treated For Title IV Purposes?

Off the Cuff - Episode 210 Transcript

Is an Academic Or Graduation Incentive Award Paid To an Athlete Considered Estimated Financial Assistance?

Does the First-Come, First-Served Prohibition Still Apply When Awarding FSEOG?

NCAA Permitting College Athletes to Profit Off of Name, Image, and Likeness Comes With Questions for Financial Aid Offices

For Direct Loans, Are We Required To Recalculate the COA Or EFC If the Student Withdraws Between the Fall and Spring Terms?

2021 Will Test Us. Here's How Rethinking the Aid Offer Will Help Us Through

What Happens When a Clock-Hour Student Returns Within 180-Days and the Coronavirus Indicator Has Already Been Set?

Can a Student Receive the CARES Act Withdrawal Benefits More Than Once?

How Do We Process Direct Loans When We Attach an Intersession To Fall Semester?

Do Discharged Loans Count Against a Student's Aggregate Loan Limit?

Are Overpayments Waived If the Student Withdraws From Some But Not All Classes Due To COVID-19?

Are We Required To Recalculate the COA and Repackage Students If Tuition Or Fees Change After Initial Packaging?

Do We Return Federal Pell Grant and Scholarship Funds After an Award Recalculation and Overaward?

When Do Emergency FSEOG Funds Need To Be Spent?

How Long Can We Extend a Term Or Payment Period Due To Coronavirus?

Is a Public State School Considered a State Entity When Excluding Emergency Relief From Income and EFA?

Must We Recalculate Title IV Aid and the COA If the Student Is Unable To Attend a Module Due To Coronavirus?