MVP: Most Valuable Professional is an occasional series that features a brief Q&A with a different NASFAA member. Do you know a financial aid colleague with something interesting to say? Send the names of potential future MVPs and a short note about why you're nominating them to [email protected]. 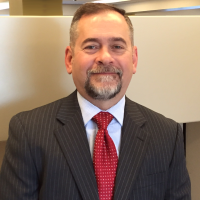 Glad I did it but wouldn't do it again: I took a very quick trip to Yosemite National Park in California and did not have time to actually hike all of Half Dome. So, I thought it would be smart to take one of the mule rides up the trail to the base of the main climb. It just so happens they had one no-show on that trip, so off I went. Never again. NEVER.

What's on your desk right now? Competency-based education. I think this is the future, particularly for two-year institutions that serve working adults.

What was the best thing that happened to you this past week? Spending time with family.

Superpower I'd like to have: Invisibility. To be exposed to some of the backroom discussions that must take place when the Department of Education comes up with these regulations would be fascinating.

One thing I would like to change about the current financial aid system is: I hate to say this because it is such a mantra right now, but I really have to go with simplification. Not FAFSA simplification, but true regulatory reform that simplifies the process for students and institutions.

Have always wanted to: Take a year off work, load up the backpack and travel the world.

Would never: Rock climb a shear face. Those folks are nuts.

Can't live without: Pizza. It's a staple at my house.

Guilty pleasure: House of Cards. It is the only TV show that I actually binge-watch.

Something I wish I had known my first year working in financial aid: I wish I had better appreciated the impact we actually have on individuals.

How my friends describe me: Fun and adventurous. There is so much out there to see and do. Life is just too short to get too hung up on things that don't matter. I have to stop myself at times to remember that concept.

How my colleagues would describe me: Driven, creative.

My idea of a perfect day: A sunny day on the slopes, snowboard strapped to my feet carving through six inches of fresh powder. It really just doesn't get any better, dude.

Actor who would play me in a movie: Well, given the fact that I am often confused for Bradley Cooper, I guess he would do.

Favorite quote or song lyric: One of my favorite song lyrics is from a Gary Allen song,: "Life ain't always beautiful, but it's a beautiful ride."

What NASFAA service/product is most helpful to you? Today's News. I rely on this to help ensure I've not missed something and to get good information on what is happening at other institutions.

My most motivating financial aid experience was: I was leaving late one night and as I walked through the lobby there was a young man with his mother and grandmother talking amongst themselves. The mother and grandmother were crying and the young man was saying that it was OK, he didn't have to go to college. The mother responded that he did need to go and she would find a way to pay for it. She was sobbing at this point. It was clear they were lost in the process. I gave them my card and told them not to worry, that we would get it worked out. Come to find out, he was eligible for a full ride through state and federal aid. I followed his academic progress until he graduated with his associate degree: on time and with an above average GPA.

My favorite thing about my job is: The work we do is so important and unfortunately at times that gets lost in the day-to-day. Many people want to change the world for the better, but we actually get to. It is incredibly rewarding to know that lives are changed for the better by what we do every day.

Want to say hello to Ben or reply to something he said? Please leave your remarks in the comments section below. You can also take a look back at our past MVPs to read any you missed the first time around.

Do you know a financial aid colleague with something interesting to say? Send the names of potential future MVPs and a short note about why you're nominating them to [email protected].

Hi Ben, long time no talk to or see. It is good to hear how out-going you are and to see the pleasure you have in your job and your life! Life IS Good!! Meg Hurt