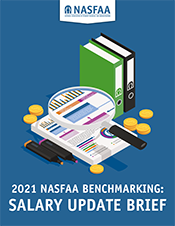 For more than two decades, NASFAA has conducted benchmarking surveys about financial aid administrators and offices. From these surveys, NASFAA produces a biannual benchmarking report on the earnings of individuals with similar characteristics and roles, and creates its Staffing Model, which demonstrates how offices with similar characteristics are staffed.

Due to the onset of COVID-19, NASFAA made the decision not to administer the survey used to update its Benchmarking Report containing information on salaries, staffing, and financial aid campus relations in 2020. Instead, NASFAA worked with the College and University Professional Association for Human Resources (CUPA-HR) to produce a brief with updated financial aid-related salary information for publication in 2021. NASFAA will resume data collection for, and publication of, its biannual benchmarking report in 2022.

Report: Majority of Undergraduates Relied on Some Form of Federal Aid

Findings from NASFAA's Research on the College Financing Plan