Report: How Middle-Income Families Benefit When the Maximum Pell Award Is Increased 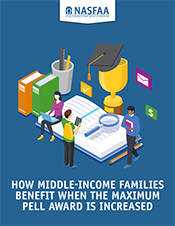 In a world of limited resources, should we focus on increasing the Pell Grant for current recipients or expanding eligibility to more middle-income students, meaning those with higher Expected Family Contributions (EFCs)? Put simply, it's not an either/or scenario.

Both expand access to Pell Grants for middle-class families, but they do it while also increasing Pell Grants to low-income families.

When the Pell Grant maximum award authorized by Congress increases, the majority of currently Pell-eligible students see an increase to their award equal to the amount of the increase to the max award.

Another way of expanding Pell Grant eligibility into the middle class is by changing the federal methodology formula, as was done in the Consolidated Appropriations Act of 2021.

While there may be other approaches to expanding Pell Grant eligibility to more middle class applicants without increasing the Pell award amounts of current recipients at all, they would involve a complete overhaul of the statute that determines how Pell eligibility is determined, an ill-advised endeavor to undertake while in the midst of implementing the revamped FM formula. The simplest, most predictable method of expanding Pell Grant eligibility further into the middle class is to increase the maximum Pell Grant award.

Investing in Our Future

Report: NASFAA Proposal To Simplify FAFSA Would Cost Less Than Most