A panel of experts gathered in Washington, D.C. Thursday to discuss the future of higher education under the 116th Congress, agreeing that the possibility it will be able to pass a bill to reauthorize the Higher Education Act (HEA) is low.

Earlier this week, Sen. Lamar Alexander (R-TN), who chairs the Senate Health, Education, Labor, and Pensions (HELP) committee, outlined his policy priorities for a reauthorization bill during an event at the American Enterprise Institute (AEI), which included three main ideas: simplifying the FAFSA, streamlining student loan repayment, and creating a new accountability system for institutions based primarily on loan repayment. Kicking off Thursday’s panel discussion hosted by Inside Higher Ed, Alexander reiterated that he was optimistic that Congress could find the bipartisan support to pass a bill by Christmas.

Following Alexander at the podium Thursday, Rep. Bobby Scott, (D-VA) chairman of the House education committee, was much less hopeful that both sides of aisle would come to an agreement on key issues in the near future, citing vast differences in the House Republicans’ bill, the PROSPER Act, and House Democrats’ bill, the Aim Higher Act (AHA), introduced last session. Scott also seemed to disagree with some of Alexander’s newly outlined proposals, such as the idea to expand some version of gainful employment to all institutions, whereas now the regulation for the most part targets the for-profit sector. “Not every degree can be immediately monetized,” Scott said, adding that lawmakers should not limit the opportunity for students to pursue liberal arts degrees.

While Scott said Thursday that he was “encouraged by the optimism in the House and Senate” to take up higher education issues, he was not open to finding a “narrow compromise” on policies for the sake of passing a bill soon. Scott said that to garner support from Democrats, a bill would need to “go beyond simplification” and focus on college completion, adding that “we need long overdue structural reforms” and to “address disinvestment of states” in higher education. 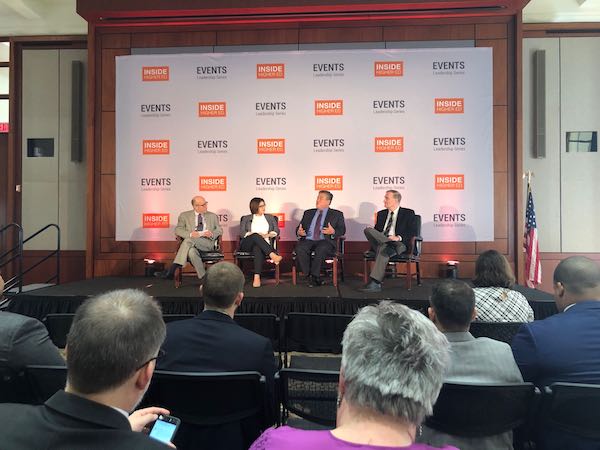 The panelists—Terry Hartle, the senior vice president for government and public affairs for the American Council on Education, Julie Peller, the executive director of Higher Learning Advocates, and Jee Hang Lee, the vice president for public policy and external relations for the Association of Community College Trustees—were also not confident that a reauthorization bill was imminent. In fact, when asked what they thought the percentage of likelihood was that this Congress would pass a bill, they answered 50, 40, and 30 percent, respectively.

Hartle said that a comprehensive HEA reform would be a “heavy lift,” as issues surrounding topics such as Title VII, policies targeting the for-profit sector, and setting up an accountability system would “derail” the conversation among lawmakers. For example, while Terry said that there is widespread agreement that the current “triad of accountability”—the federal government, states, and accreditors—is slow at identifying problematic institutions and programs, it will be difficult for lawmakers to develop a better method under a higher education system as “complicated and diverse” as ours.

Peller called Alexander’s Christmas timeline “aggressive and unlikely,” especially due to the fact that he and Scott are currently focused on very different issues within higher education. She added that “time is really the biggest enemy here,” with regards to passing a bill soon, as the House committee is largely new to Congress and education issues—a concern echoed by the other panelists.

All three panelists agreed, however, that they saw bipartisan support for streamlining the FAFSA and standardizing award notification language—both of which NASFAA has supported. For example, NASFAA expressed its support to simplify the FAFSA through better integration of the Internal Revenue Service Data Retrieval Tool (IRS-DRT) earlier this year, and explained in a September issue brief on award notifications that using consumer-tested, standard terminology and common data elements will make it easier for students to become more familiar with key terms.