The Department of Education (ED) has taken many steps to better K-12 education standards, such as through the No Child Left Behind Act, which contributed to a national high school graduation rate of 84 percent for the 2015-16 academic year. A new report from the think tank Third Way explores the economic effects that would result if the college completion rate was equally high—which the author wrote is achievable if we dedicate the same “laser-like focus” to higher education and implement policy changes in the Higher Education Act (HEA) to increase retention rates.

The author of the report, Third Way education policy advisor Wesley Whistle, argued that if college completion rates were raised from 57 percent—a figure he estimated using data from the National Student Clearinghouse Research Center—to 84 percent for just one class of students, it would increase the number of degree-holders by 1.3 million people, and would have myriad benefits for students, parents, and taxpayers. For example, it would increase the number of people employed to 107,400—accounting for workforce participation rates among different types of degree-holders—and reduce the number of people in poverty by 48,000. He also noted that over the course of one class of students’ lifetimes, raising the completion rate would increase local, state, and federal tax revenue by $90 billion, and increase contributions to Social Security funds by $50 billion. 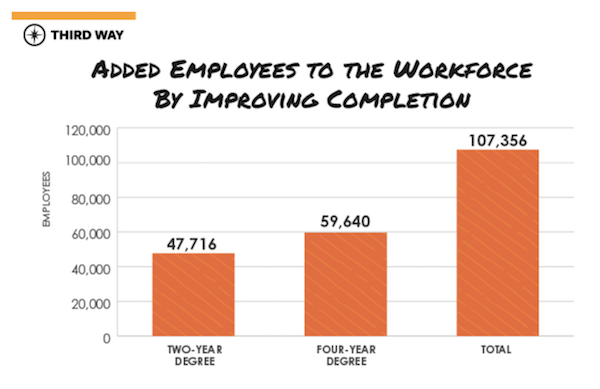 According to Whistle, the means for increasing college completion rates lies in Congress’ ability to incorporate policies into the next reauthorization of the HEA that “prioritize completion and other important student outcomes like the ability to repay loans and earn a decent living post-graduation.” While momentum appeared to have slowed with the reauthorization process, earlier this week reports came out that Sen. Lamar Alexander (R-TN), chair of the Senate Health, Education, Labor, and Pensions (HELP) committee tasked with rewriting the legislation, hopes to pass a bill by next Christmas.

Last summer, Third Way partnered with right-leaning think tank the American Enterprise Institute (AEI) to bring together a group of higher education experts to discuss policies to increase retention rates. Sarah Turner, a professor and former chair of the economics department at the University of Virginia (UVA), suggested that policymakers mandate that students are provided with information on institutions' graduation rates—in the form of "customized, personalized, and relevant data"—citing that 600,000 students are enrolled at institutions with graduation rates of less than 20 percent. She also emphasized that lawmakers should "address poor performance" at institutions, such as by revoking their eligibility for receiving federal funds, which has proven to be a challenge for state schools.

Mesmin Destin, an associate professor and fellow of the Institute for Policy Research at Northwestern University, argued there are psychological factors that policymakers and institutions can address that inhibit students from accessing and completing college. Destin argued that institutions can reframe "points of psychological friction," such as financial aid counseling, to convey to a student that their institution supports them, which can, in turn, push the student to graduate.

Finally, Matt Chingos from the Urban Institute argued that "academic preparedness" plays a big role in whether students graduate and recommended that policymakers implement measures such as mandating more rigorous coursework at the high school level to teach students the skills they need to perform well in college courses.

"Finding ways to help these near-completers cross the finish line is an important and achievable goal for institutions focused on near-term completion outcomes," the report said.

In the Third Way report, Whistle also argued that raising completion rates is “not an unreasonable goal,” adding that “all college students have already demonstrated some academic success by earning a high school diploma, have been selected by a college through some form of an application process, and more than half of college dropouts have at least two years of postsecondary education under their belts.”

“[M]aking sure all students have the opportunities they need to earn a stable and secure life must start with helping all students not just make it to college—but through college—so they can reap the clear benefits a college degree affords in today’s economy,” Whistle wrote. “... [O]ur country must give college completion the same laser-like focus we gave our nation’s high schools over the last two decades.”

Except “all college students have already demonstrated some academic success by earning a high school diploma, have been selected by a college through some form of an application process..." is not an accurate statement. America may have to pick either open enrollment - the admission practice at many/most/nearly all community colleges and for-profit schools - and higher graduation rates. I know from the time when I worked at a community college that the students who tested at junior HS levels in English and/or math on their way in the door were extremely unlikely to graduate. Not impossible, but the odds were stacked strongly against them. It's an awful lot to ask of a college...fix in a semester or two what the public schools couldn't do in 5 or 6 years.

I personally would love to see open enrollment schools continue their policies, at least at the community college level - their mission is to serve their community, after all - but if colleges' T4 participation is going to hinge on graduation rates, we may start to see more selectivity at those schools.

Making Financial Aid Work for All: NASFAA Priorities for 2017 and Beyond

A Look Back: Obama and Higher Ed in State of the Union History

NASFAA's Altitude: From "OK, Boomer" to "You OK, Boomer?" and Other Thoughts on Wages and the Great Resignation

OTC Inside the Beltway: Political Predictions for Higher Ed in 2022

OTC From the Field: A Conversation With Brent Tener, NASFAA’s National Chair

OTC From the Field: Developing Your Career in the Financial Aid Profession