Are We Getting What We Should From Higher Education? 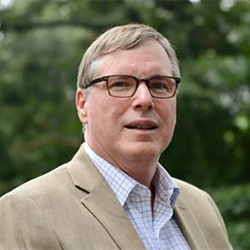 By David A. Bergeron

Initially, accreditors assessed quality through peer reviews that emphasized input and financial stability. In the late 1980s, however, the focus on quality began to shift as the federal government introduced the use of proxies, like federal student loan default rates, for quality. The first foray into proxies for quality also represented an early effort by the U.S. Department of Education (ED) to exploit "big data" to judge whether institutions of higher education "measured up" to expectations, albeit against a narrowly crafted and arguably imperfect and unreliable metric. Accreditors, in response to significant pressure from Congress and presidential administrations of both parties, have reacted slowly and now focus, to a much greater extent, on student learning outcomes.

When I wrote the article "What Does Value Look Like in Higher Education?" in 2014, I tried to address the narrowness and unreliability of the cohort default rate metric by offering a broader set of metrics that should be considered when deciding whether to grant institutions, and the students they enroll, access to federal student financial aid. When asked to write more on the subject for a chapter in the 2018 book, "Accreditation on the Edge," it seemed an appropriate time to extend the discussion to the question of how the federal government should manage risk in the federal student aid system.

But perhaps a better question would be whether we are getting what we should from higher education.

Students should expect access to an education that is affordable, where they are supported in their persistence through the completion of a degree or certificate, and where they are adequately prepared for life after completing postsecondary education.

Consider the first two outcomes: access and affordability. Providing access and affordability is foundational and the absolute minimum we should expect of institutions in return for eligibility to participate in the federal student aid programs and receive other federal benefits. Institutions failing to demonstrate that they provide meaningful access (i.e., enroll only a few, if any, low- and middle-income students) and are not affordable (i.e., have a net price for low- and middle-income students that results in an unmanageable level of debt after graduation) should not be eligible to participate in the federal student aid programs nor should they be granted access to tax benefits, federal research funding, and the like.

Institutions meeting these foundational standards should also be expected to demonstrate the ability to retain students until completion of their degree or certificate program and ensure meaningful post-graduation outcomes. Some higher education policy analysts, such as Third Way and Urban Institute, have suggested that institutions with graduation rates below a threshold, say 10 or 25 percent, become ineligible for federal student aid.  This is not an approach I would favor. Instead, the federal government should provide poor-performing public and private non-profit institutions with assistance in meeting established standards. This is where accreditation ought to come in. The peer review process used by accreditors should help institutions improve their retention, completion, and post-graduation outcomes.

Additionally, meeting the retention and post-graduation outcomes may require further investment of financial support to reduce or eliminate the differences in the financial resources (i.e., revenues) available to the institution to meet the needs of students. Over time, and after receiving appropriate support and resources, institutions failing to retain low- and middle-income students and produce strong post-graduation outcomes should lose eligibility for federal student aid and other benefits.

Consider, for example, these issues in the context of public colleges and universities in Michigan. According to data for 2017-18 reported to the National Center for Education Statistics Integrated Postsecondary Education Data System, only 15 percent of undergraduates entering the University of Michigan – Ann Arbor (UM-AA) received a Federal Pell Grant compared to the University of Michigan – Dearborn (UM-D), where 43 percent of undergraduate students received a Pell Grant, and Henry Ford College (HFC), where nearly three quarters of undergraduates received Pell. Not only do the students at UM-D and HFC have fewer financial resources available to them, they are also likely to be less well prepared academically for the rigors of higher education than those at UM-AA. Despite these facts, UM-AA received a total per-student revenue of nearly $160,000, which is more than four times the total per-student revenue of $39,000 available to UM-D and eight times the less than $20,000 total at HFC.

For me, the key questions in higher education are not about quality but about will, on the one hand, and resources on the other.

Access is all about will. Do we have the will to ensure that students from low- and middle-income families have equal access to quality institutions and programs? The data presented above suggest we do not. As a result, many capable students from low- and middle-income families are being left behind, while more affluent families get their children into better-resourced institutions and programs.

Retention, completion, and post-graduation outcomes are all about resources. To be successful, students need adequate faculty and support structures to help them reach their goals. One measure of how supportive an institution is the often-advertised metric of faculty-per-student ratio. Here again, the difference between UM-AA, UM-D, and HFC are stark, with UM-AA having one faculty member per 11 students compared to UM-D and HFC's ratios of one to 17 and one to 20, respectively.

Even without additional faculty and more supportive structures, many students will still succeed. At UM-D, more than 2,100 students received a bachelor's, master's, or doctoral degree or a certificate in 2017-18. At HFC, in addition to the six percent who graduated, another 36 percent transferred to another institution of higher education. Many of the other students will struggle from their perceived failure. The failure, however, isn't theirs. It's ours, because we haven't provided them with what they need for success. 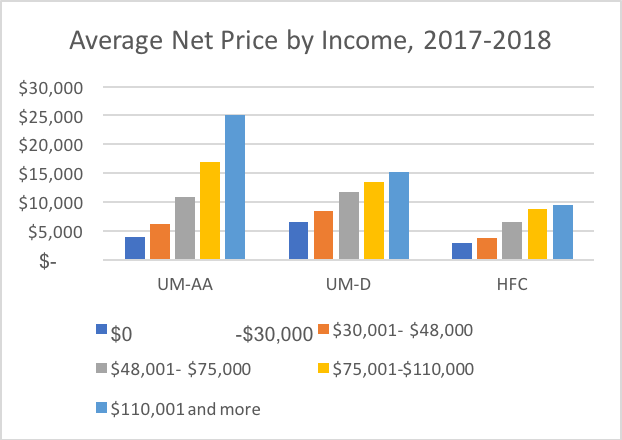 At the end of the day, we should judge institutions of higher education by their success in serving an economically and racially diverse student body affordably with strong retention and graduation rates and post-graduation outcomes. Student financial aid plays a critical role in this context by making college affordable. To continue to rely strongly on the current accreditation process will ultimately leave our nation's higher education system in another century.

Quality proxies are necessary because while it may not be possible to arrive at a universally agreed upon definition, we can at least agree that it is fundamentally wrong to knowingly turn out students with mountains of debt that they cannot pay all in the name of access, then passing that cost to taxpayers when the students cannot pay in full, as predicted. Covering this up with income driven repayment is an attempt at having it both ways – unlimited access for any and all, up to full cost of attendance indefinitely, and make it all affordable, no matter the amount involved, the number of degrees, the quality of the program, or how predictable the financial hardship would be (How many times have we thought something like “of course the student cannot pay back $150,000 in loans for this online psychology Master’s [or fill in another one] degree”?). Access we’ve nailed – If you want a degree, you can find one that meets you where you are, and there’s an unlimited pool of loans available to cover full COA. The question is access to what and at whose expense?

OK, a lot to take in here, and there's a character limit, so I'm just going to cherry pick a bit. The concept of judging schools by the number of low/middle income students they serve disregards an important fact, which is that, try as they may, schools cannot control their applicant pool, nor can they control which admitted applicants accept their offer (keep in mind that the overwhelming majority of students attend a school within 50 miles of home...their enrollment decisions are largely based on location, location, location, even more so for low income students). The characteristics of the class you enroll will, to a large extent, reflect those of the applicants who decided to apply to your school. Add to that the unfortunate but undeniable high correlation between academic preparedness and family wealth; just like many other privileges in our society, tell me your zip code and I'll tell you how likely you are to succeed. Higher ed plays a unique role in assisting people achieve upward mobility, but we can't guarantee it, we can't magically put an instant end to poverty and all of the problems associated with it.

In some cases, yes, retention problems are the school's fault. But I've yet to see data that shows it always or even usually is. A student who leaves school because they decide to change courses of study, or they're homesick, or they have family obligations, or can't forgo income to attend classes...I don't know that even the most service-focused colleges can do much there.

These are issues too complex for any "draw a line in the sand" solution.

This is a good start to discussions about the accreditation process. Accreditation, in my opinion, spends a good amount of time with academic outcomes (as well it should) but no effort on the impact of student/family income and financial aid eligibility. If I remember, littler or no time by the accreditation team was spent discussing financial aid except when students complained about the service. The only financial aid input was the default rate and even then, that was not questioned or explained. I was impressed by the discussion on college resources and it's role in student success as well as the Average Net price paid by families. Students with no family support would have a difficult time coming up with the $4,000; therefore, making the option to go to and stay in college difficult.. I look forward to reading more about this topic.

With Biden Poised to Take White House, What’s Next for His Higher Education Priorities?