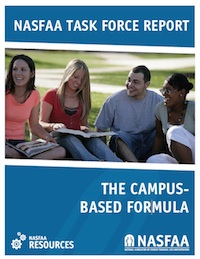 NASFAA’s Campus-Based Aid Allocation Task Force was convened by the NASFAA Board of Directors to examine the formula by which congressional appropriations for the Federal Supplemental Educational Opportunity Grant (FSEOG), Federal Work-Study (FWS), and Perkins Loan programs are distributed to schools, and, in consultation with appropriate groups, develop proposals for changes to the allocation formula. This work is intended to inform the ongoing Higher Education Act reauthorization.

The task force comprised a geographically diverse group of 13 NASFAA members from all types of postsecondary institutions, with a particular emphasis on the inclusion of members representing schools with the full range of campus-based aid allocations. The group conducted its work between October 2013 and June 2014, and its recommendations were accepted and approved by the NASFAA Board of Directors in June 2014.

Based on the research and discussions the task force developed, and the NASFAA Board accepted and endorsed, the full set of recommendations are detailed in this report. Highlights of those recommendations include:

Can We Use Federal Work-Study Funds To Pay the Employer's Share of FICA Taxes?

Can We Swap Institutional Funds With FSEOG at the End Of the Award Year?

Does the First-Come, First-Served Prohibition Still Apply When Awarding FSEOG?

Can We Prohibit Or Limit Federal Work-Study Employment As a Stipulation Of the Student's Financial Aid Probation?

Can the School Reimburse Itself For the Nonfederal Portion Of FSEOG If the Aggregate Basis Match Is Used?

Is the Institutional Share Of FWS and FSEOG Waived For the 2021-22 Award Year?

Does FWS Count When Determining the Percentage Of the Payment Period the Student Completed (R2T4 Denominator)?

Can We Award Or Increase an FSEOG Award After the Student Is No Longer Enrolled For the Award Year?

Can an FWS Student Work Remotely Beyond COVID-19?

Pop Quiz – Is the Institutional Match for FSEOG Waived for the 2021-22 Award Year?

Can We Claim an Administrative Cost Allowance Against Emergency FSEOG?

Pop Quiz – Can a Student Receive Both Regular FSEOG and Emergency FSEOG?

Can We Continue To Pay FWS Students Who Are Unable To Work If We Planned In Advance To Send Students Home After Thanksgiving?

Can a School Transfer 100 Percent Of Its Unspent FWS Funds Into FSEOG Due To COVID-19?

Can a FWS Student Help With Campus Voter Registration?

In Wake of Pandemic, Student Groups Raise Aid for Peers in Need

Has the FISAP Deadline Been Extended Due To COVID-19?