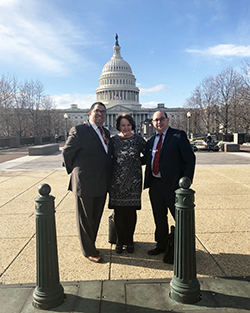 The members – Brenda Burke of the University of Utah, Brian Dixon of Washington State University, and Elijah Herr of Lane Community College – met with staffers from several congressional offices on both sides of the aisle.

During their meetings the members emphasized that while the bill— the Promoting Real Opportunity, Success and Prosperity Through Education Reform (PROSPER) Act—includes promising ideas like cutting origination fees, it would hinder students’ access to higher education by eliminating programs such as the Federal Supplemental Educational Opportunity Grant (FSEOG), Public Student Loan Forgiveness (PSLF), and other income-driven loan forgiveness programs.

Dixon said that the notion of streamlining aid is being used as an excuse to eliminate these crucial programs. He told lawmakers that he does not support the “one size fits all” approach, and that the bill ignores the diversity of students’ needs. 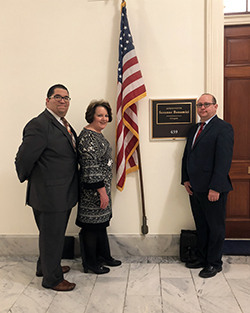 “All that we’re doing is making schools less affordable for students,” he said. “How do we grow the economy if we don’t support students who contribute to that economy?”

Burke said it was ironic that the bill mentions an intent to simplify the FAFSA while making it harder for students to receive financial aid.

“It makes it easier to access aid, but then there’s no aid,” Burke said.

One aspect of the bill that Herr said he supported is the proposal to allow institutions to limit the amount of loans they give to students. He said that he constantly sees students overborrowing on low-cost education.

“The problem is that when you offer up a large pot of money, the temptation to say no is not great,” he said. “Once they have the money, it’s very difficult for them to give it back.”

The members also expressed their support for a year-round Pell Grant and warned lawmakers of the dangers of taking money from the Pell Grant reserve.

Herr said he is extremely supportive of the notion because a significant number of his students are eligible for Pell Grants, and Burke called it “a definite push toward graduation in a timely manner.” She also told lawmakers that taking from money from the reserve to use for other programs will eventually limit schools’ ability to offer aid to students.

Herr said that participating in the Advocacy Pipeline was a great experience.

“It’s important to connect your office to the rest of the financial aid world,” he said.