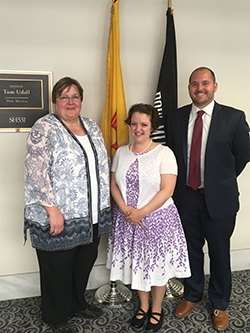 Janell Valdez of the University of New Mexico, Elizabeth Tilton of Unity College, and Jeffrey Teague of Carthage College shared personal stories, including triumphs and fears, with lawmakers on both sides of the aisle as part of NASFAA's Advocacy Pipeline.

The group expressed gratitude for increases to the federal Pell Grant program included in the fiscal year 2018 omnibus bill, but raised concerns over the timeline for the budget approval.

Since lawmakers did not reach an agreement on the omnibus bill until late March, the Pell Grant payment and disbursement schedules were released after many schools had already sent students financial aid packages.

Tilton, whose institution first sent award letters in November, said this created confusion for families who made decisions in the spring, but then had to reconsider based on updated amounts released in April.

As Congress begins considering appropriations for fiscal year 2019, members urged lawmakers to either come to an agreement sooner, or tie Pell increases to inflation to give financial aid administrators an idea of what to expect for the final numbers.

The group also shared positive and negative insights on the PROSPER Act, the House Republicans' bill for the long overdue reauthorization of the HEA.

Rep. Virginia Foxx (R-NC), chairwoman of the House Committee on Education and the Workforce, is pushing to move the bill to a floor vote this month. But amid midterm elections and comments Sen. Lamar Alexander (R-TN) made last week that he does not foresee Senate action on the bill this session, the staffers had little confidence the bill will pass as it is currently written. 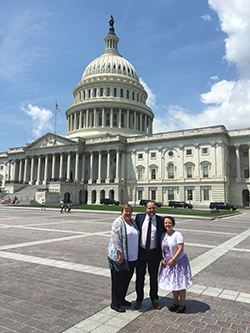 Still, the group agreed that the PROSPER Act's elimination of origination fees was a victory for their students. Teague said these hidden fees are often a "make or break" for many of the first-generation students his institution serves.

"It would streamline the process a lot more, especially for students not familiar with the financial aid process," Teague said.

In terms of their concerns, the group shared how eliminating Federal Grad PLUS Loans the Public Service Loan Forgiveness (PSLF) program would inflict burdens upon their neediest students.

Valdez said PSLF can encourage medical students to work in rural areas in their hometowns, instead of looking for higher wages in another state. Cutting the program could deter these students from filling her state's medical centers and nonprofit organizations, she said.

Another point the group noted, aside from discussing the PROSPER Act, was the importance of standardizing the loan servicing process.

Tilton said even she, a financial aid professional, had to seek help to understand her personal loan repayment. The group suggested students could better understand their options if servicers had to abide by one manual.

"If I can't navigate the program, it's no wonder my students or parents can't do it," Tilton said.

After meeting with five staffers, the members said they felt more involved in the policymaking process and were reassured that people on Capitol Hill are willing to listen to their concerns.

"It gives a positive light to things," said Teague, assistant director of financial aid at Carthage College. "It re-energizes me."