NASFAA staff and members from institutions in Michigan and North Carolina gathered on Capitol Hill Tuesday to discuss concerns with prior-prior year (PPY) implementation, and the potential resurrection of the year-round Pell Grant.

Donna Holubik of Eastern Michigan University, Doug Levy of Macomb Community College, and Lynette Lorenzetti of Elon University were in DC participating in NASFAA's Advocacy Pipeline - an opportunity to join NASFAA's policy and federal relations staff in meeting with congressional staffers. While many who work on Capitol Hill are familiar with the implementation of PPY, NASFAA members raised a new issue that if addressed could help ease the burden of implementation.

One goal of using prior-prior year income data on the FAFSA is to give students and families information about financial aid sooner, so they will be able to make better-informed decisions about attending college. But with the move to PPY, there will be a mismatch between the time when institutions would ideally send out award letters, the approval of the next year’s Pell Grant funding by Congress, and the publication of Pell charts that have a hand in guiding how institutions shape their award letters.

Information on Pell Grant funding and maximum awards are not available until the end of January, whereas institutions might otherwise be ready to send award letters in November or December. While part of the process –– passing a federal budget on time –– is hard to control, NASFAA members noted that Congress can work to change statute to allow the Department of Education (ED) to use earlier (but still accurate) data on inflation from the Consumer Price Index. That way, ED would have some information on Pell awards ready to publish as soon as a budget passed.

“The push to get information out to students sooner is going to be impossible without those charts,” Holubik said, noting that the delay might cause institutions to send award letters based on estimates, or to delay sending out award letters, which would defeat the purpose of using PPY. 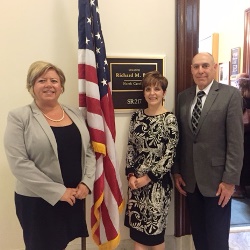 NASFAA members also discussed that while they are supportive of the idea of reintroducing the year-round Pell Grant, they’d like to see the program implemented in a more simplified manner than its previous iteration. Elon University’s Lorenzetti said the way the disbursement of Pell awards was structured was an administrative “nightmare,” and required financial aid administrators to manually calculate Pell eligibility for students in many circumstances.

“Free money for our students is never a bad thing. We’re not saying, ‘Don’t bring back year-round Pell,’” Lorenzetti said. “But it was a huge burden for us.”

Finally, NASFAA members urged congressional staffers to support giving institutions the authority in the reauthorization of the Higher Education Act to establish loan limits as a way to help prevent students from over-borrowing. While there are concerns about discriminating against certain types of students or academic programs, the legislation could be written in a way to protect students and set limits in a responsible manner, they said.

Levy of Macomb Community College noted that because institutions are held accountable for their cohort default rates, they should have a hand in participating in the borrowing process.

“We would be handling taxpayer money more judiciously if we could participate,” Levy said.