NASFAA's Altitude: From "OK, Boomer" to "You OK, Boomer?" and Other Thoughts on Wages and the Great Resignation

Welcome to NASFAA's "Altitude," a new-ish Today's News series that aims to provide a 30,000-foot view on the intersections of economics, public policy, management, and student financial aid. Look for an assortment of links, reactions, conversations, and other missives from NASFAA President Justin Draeger and others. It may be easier to say what this series isn't: a place to find answers to tough regulatory and implementation questions. We'll be trying out this series over the next few months, so please send us your comments and follow us on Twitter.

If you're working in an aid office and worried about the "great resignation" (and it appears many are), Derek Thompson tries to set your mind at ease in The Atlantic by dissecting the issue in more detail. His findings:

1. People Are Not Quitting, But Upgrading to Higher Paying Jobs

Most people are not quitting — they're switching to better, higher paying jobs in industries that are raising wages. To a big extent, the so-called great resignation is actually the "great job transfer," as people move to higher paying positions.

Data from the Federal Reserve Bank of Atlanta measures the nominal wage growth of individuals dating back to 1998. The fastest way to wage growth, according to their model? Switch jobs. That's bad news if you're an office that has lower-wage employees. 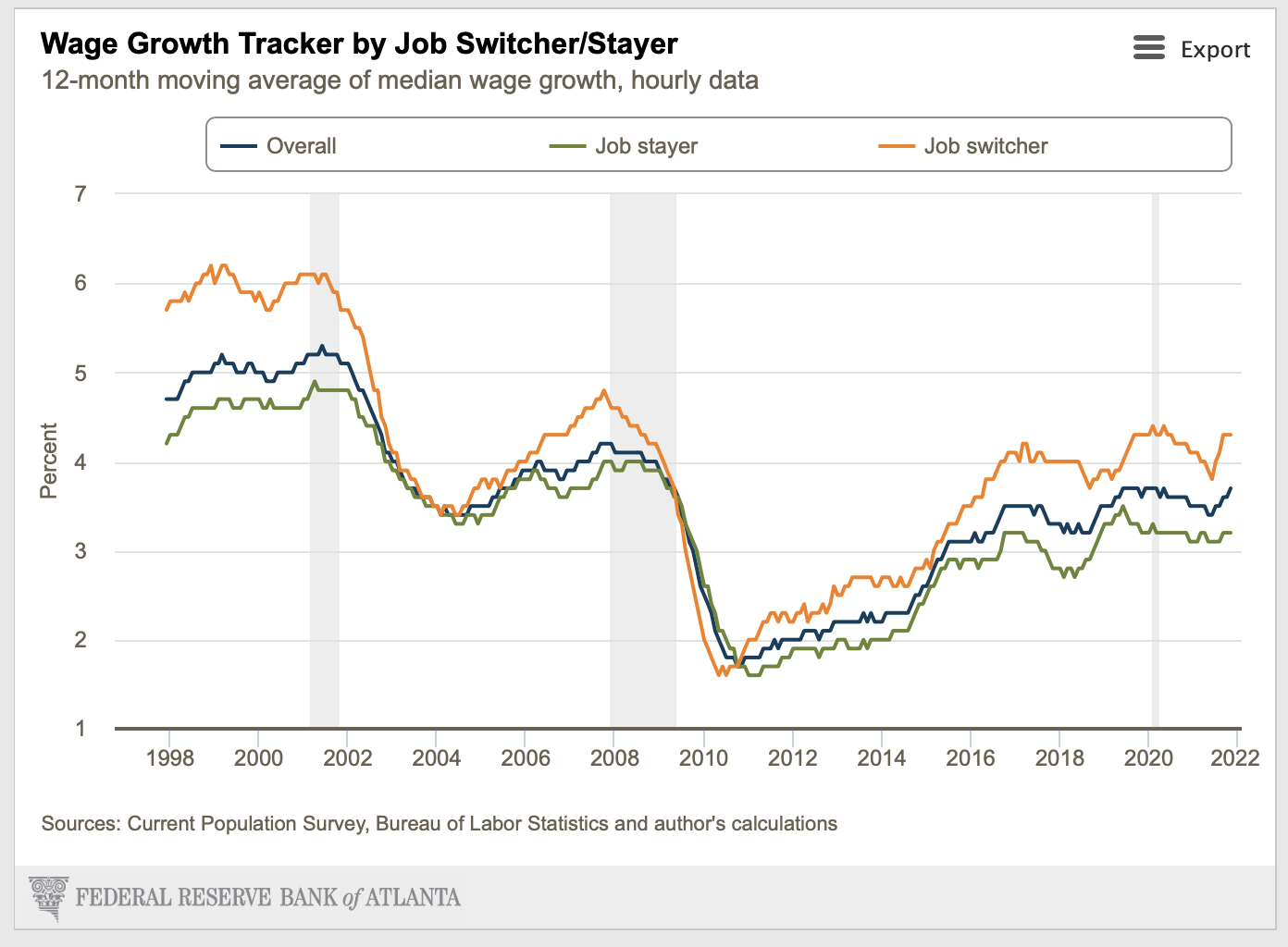 Are people leaving aid offices to work in other aid offices, or leaving financial aid entirely? My sense is that it may be the latter.

2. Burnout Not Necessarily Leading to Resignations

For all of the reported burnout in "white collar" jobs, it doesn't appear to be leading to higher than usual resignations, according to Thompson. Yes, there may be a lot of burnout, but the data says that burnout alone doesn't appear to be leading people to quit in finance, real estate, publishing, software development, and/or the information sector broadly. That's not to say that burnout doesn't have lots of other negative impacts in the office, or on students.

When people feel burned out, underpaid, and undervalued, I assume they'll be less willing to put in extra work during periods of enrollment crunch. As one NASFAA commenter recently pointed out:

3. As For Outright Resignations, Retirements Leading the Way

Only about 10% of the workforce is actually leaving entirely, and those are mostly led by retirees who are retiring early. In fact, data says most companies and institutions should be most worried about their senior executives and managers, baby boomers who have had enough. As Jeanna Smialek put it in The New York Times, 2021 "may have been the year that 'OK, Boomer' ceded the floor to 'You OK, Boomer?'"

Financial aid offices are facing significant turnover and resignations, as reported by NASFAA's Owen Daugherty last week. That has widespread implications for schools and students.  As I told Inside Higher Ed and often tell college presidents and boards, schools can pay now, or pay more later, when they're found understaffed, underresouced, and out of compliance.

As one NASFAA commenter framed it:

"I can speak from an applicant's point of view. With over a decade of experience and 7 NASFAA credentials, the schools are not paying enough for aid administrators. Currently I have done interviews for FAA roles, management and non-management, and they are offering $45k or less, most offering in the high $30's. The schools' administrators or board of the schools is what's hurting the profession, not considering experience and credentials appropriately and offering low wages."

If data holds true, this may be a relatively simple problem to solve: increase wages in financial aid offices.  Ah, but I can hear the "easier said than done" comments already! Not all institutional budgets are in a place to provide significant salary increases to stem resignations. At the end of the day, this may come down to institutional priorities, as I recently discussed with National Chair Brent Tener in "Off The Cuff."

I'm not sure that we've reached "You OK, Boomer?" stage just yet. One of the comments to NASFAA's recent article on turnover and the Great Resignation implied that long-time leaders in Financial Aid Offices should get out of the way; "...are you stagnating and blocking the pipeline...?" Trust us, some of us are retiring as soon as we can, but in the meantime we still have bills to pay too.

As far as schools seeing the consequences of lack of compliance from an understaffed aid office, I'd like to believe that college presidents' reaction will be "we should hire more financial aid staff and pay them better" and not just look for a scapegoat and fire the director. But I think the latter is how many would react.

Regarding staffing, it is our job as Directors to communicate constantly and strategically with Presidents, Boards of Trustees, and others in a manner that resonates with their interests in language they understand .

The message should be surgically tailored to what motivates the receiver and should never lead with "we don't have enough staff". In fact, I have found it's best not to even have staffing be the main topic of the discussion. Leaders are asked daily (if not more often) for more staff from all over the University... and the mere mentioning of it causes the listener to employ a defensive strategy...often shutting down.

Instead, I've found some success in hitting the topic indirectly:

For instance... if talking to the CFO (usually the most effective ally to have), frame the discussion as concern about medium to long range increased costs due to external factors (i.e. increased compliance scrutiny by Federal Regulators). Have a story with some key specifics and have estimated dollar amounts at hand. Have a solution in mind that focuses on bottom line dollars.

If the discussion progresses specifically to staffing, lead with considerations of "reallocation of existing resources" as opposed to "we need to hire more people". Show that you have done your homework and are being fiscally minded and creative. Also... challenge yourself to think beyond salaries too (like a CFO)... remember each staff member is more than a salary...each additional headcount is paid benefits and also represents potential additional legal liability as well. Show the cost benefit (reallocating / spending this will save us this).

If comments fall on deaf ears (and they may in your first few attempts) don't get discouraged! Keep at it. Spread goodwill. Show you're thinking in a similar capacity about fiscal sustainability.

"As I told Inside Higher Ed and often tell college presidents and boards, schools can pay now, or pay more later, when they're found understaffed, underresouced, and out of compliance."

THIS is the big problem on the horizon (or maybe we are already pretty much there). My last several years in FA, I noticed how there was generally only a small handful of people or fewer in any office that had been there for over 1-2 years, and I know several colleagues around my age/experience level that left for different career paths - "rewarding work" is a blessing, but it doesn't pay the bills.

At every college where I have worked admissions staffing has taken priority over financial aid. It is disheartening to hear administrators say "we can't cut admissions staff because they bring students to the university" yet we know without the aid offers and the family discussions we have, those students wouldn't be coming.

This is a big problem across the labor market. When ICU nurses are making $25/hr and baristas are commanding $15-23/hr there is a big problem with society's and corporate shareholder values.

OTC Inside the Beltway: Another Student Loan Payment Pause Extension and What to Make of Biden’s Budget Proposal

OTC From the Field With Dr. Ellie Bruecker: Should States Require FAFSA for High School Graduation?

OTC Inside the Beltway: State of the Union: Does Biden’s Higher Ed Agenda Have a Path Forward?