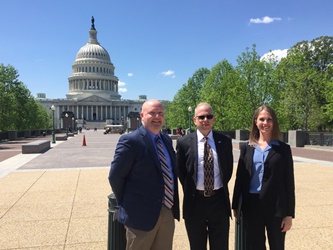 The importance of financial aid for college students, and the need to maintain funding levels for the student aid programs in the upcoming fiscal year (FY) 2018 budget, was the focus of several conversations on Capitol Hill throughout yesterday's Advocacy Pipeline event, during which NASFAA members reiterated their concerns to congressional staff members.

In a recent letter to congressional appropriators, NASFAA outlined numerous priorities to consider when working on the FY 2018 budget, which impacts the 18-19 academic year, including extending the inflation adjustment in the Federal Pell Grant Program, restoring year-round Pell, and supporting the campus-based programs. The letter also requests that Congress provide healthy funding as lawmakers continue to work on a final package for fiscal year 2017. The continuing resolution funding the government for FY 2017 expires on April 28.

Focusing their conversation on the the Federal Pell Grant Program and campus-based aid programs, Joel Carstens from the University of New Hampshire, John Falleroni from Duquesne University, and Amanda Szymanski from Pennsylvania State University emphasized the need to at least maintain current funding levels for the student aid programs, particularly by protecting the unobligated balance in the Pell Grant Program and not reallocating those funds.

They also emphasized the success of the campus-based programs like Federal Work-Study, which Carstens said illustrate the concept of "skin in the game."

"When we think about the Pell Grants being the building block for the student aid programs and the success of the program, you can make the case that the campus-based programs are more successful because of the partnerships with institutions," he said. "It's very important that [policymakers] understand that institutions are in this along with the federal government."

The members also discussed the ongoing outage of the Internal Revenue Service (IRS) Data Retrieval Tool (DRT). The tool, which has been down since early March, is not expected to be up and running for at least several months, causing problems for students and families who are filing the FAFSA and for financial aid administrators who need to verify submitted information. The members conveyed their concerns and the challenges their offices face in the wake of the tool's outage.

"We explained that finally with the data retrieval and prior-prior year (PPY), and the two of them together, it just made [filing the FAFSA] so much better this year," but "with [the DRT] going out, this was just pulling the rug out from under a lot of things we had in place" to help students and families, Falleroni said.

In addition to the burden on families, the members shared their concerns that the outage is creating more administrative burden on aid offices, who now have to verify more information than they normally would. 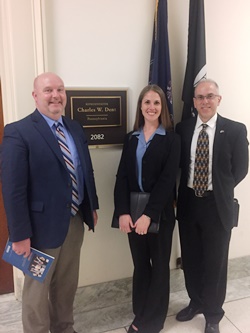 "The time and effort that is now required [to apply for aid and verify the information] because the DRT is down, it can be crippling," Szymanski said.

In a March 14 letter sent to the Department of Education (ED), NASFAA urged ED to take immediate steps to ease application and verification burdens caused by the sudden outage of the DRT. In addition to easing the administrative burden that is likely to result from the outage, restoring the DRT "needs to be a high priority for both ED and the IRS and we urge ED to leverage all available resources to restore the DRT as soon as possible," according to the letter, which was addressed to Education Secretary Betsy DeVos and Federal Student Aid Chief Operating Officer Jim Runcie. The letter was sent on behalf of community partners who represent college access and admissions.

NASFAA members highlighted the letter in their meetings on Tuesday, asking congressional staffers to continue to press the IRS and ED for a quick resolution of the DRT outage.

The DRT "not being available can be an impediment to students even pursuing an education," Carstens said. "It's a stumbling block for families in completing their aid applications" and "creates a lot of uncertainty, which is never the outcome we want."

3 things that could be done right now to help alleviate the problem:
1) Remove the IRS DR entirely from the 2017-2018 FAFSA. It's creating confusion.
2) If a student or parent filed a 2016-2017 FAFSA and completed IRS Data Retrieval for that, add this statement, "We see that you completed IRS Data Retrieval for your 2016-2017 FAFSA. Though that option is not available for 2017-2018, we can pull last year's tax return information forwards, if that information is still accurate. Below are the lines from your taxes that were retrieved last year. Please confirm if these are still accurate." Then show the lines, and at the end have another question, "Is this information still accurate?" If they select "Yes", allow that information to be carried forwards to the 2017-2018 FAFSA and mark it as IRS Data Retrieval code 02.
3) If an applicant or parent indicates they filed taxes, have an option after saying "Would you like to request an IRS Tax Return Transcript? You will need this document if you are selected for verification. If so click on this link. Be sure to return to this site to complete your FAFSA." This would then open another window to the IRS Tax Return Transcript page. Or, if possible, even embed that page from the IRS website into the FAFSA, so they don't even have to leave the page.