Higher education stakeholders concluded the first of three sessions of negotiated rulemaking, or “neg reg,” Wednesday to consider changes to the federal regulations on accreditation and other issues, debating a host of topics related to limiting the scope of regional accreditors, changing the criteria for accreditors to receive federal recognition, and strengthening the relationship between accrediting agencies and employers, among other issues.

The day kicked off with a continuation of a debate from yesterday around whether to add a representative from a state attorney general office and/or a member of the State Higher Education Executive Officers Association (SHEEO) to the table. After much discussion, the Department of Education (ED) rejected the addition of an attorney general, and the group agreed to include David Tandberg, the vice president of policy research and strategic initiatives at SHEEO, as a negotiator without an alternate negotiator.

The negotiators then jumped into a debate around ED’s proposed draft regulatory language to, according to one ED representative, “lighten the load for one criterion” for accrediting agencies to receive federal recognition. In cases where an institution has multiple accreditors, it must designate one agency as its accreditor for Title IV purposes. ED’s proposal would allow an agency that an institution did not designate as its Title IV accreditor to use its accreditation of that institution to serve as its “federal link” required to apply for federal recognition. Negotiators continued to ask ED if accrediting agencies had expressed a concern that inspired this new proposal, to which ED responded that they had not. Negotiators agreed to return to this debate once the other proposed accreditation changes were discussed. 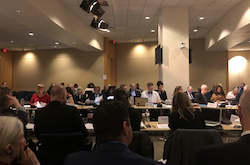 In the draft language, ED proposed to eliminate the requirement that an agency show that it had been conducting accrediting activities for two years before applying for recognition, instead proposing that an agency demonstrate it has policies in place that meet accreditation criteria prior to applying. Lea Wroblewski of the Legal Aid of Nebraska said that she was concerned that relaxing this requirement would harm students, while Michale McComis, representing national accrediting agencies, said he would support some middleground language from ED, such as mandating that agencies show they have been conducting accrediting activities successfully, but removing the mandated two-year window. A few other negotiators, however, were concerned that this set the bar too low for achieving federal recognition, and expressed support for keeping the language.

The negotiators also debated striking proposed language that would require ED to “scrutinize considerably” accrediting agencies looking to expand their oversight to graduate programs. Many negotiators were concerned with solely subjecting graduate programs to this level of oversight, and suggested expanding the language to include all expansions of scope, while others pushed to strike the language completely. Negotiators also discussed expanding a new proposal, in which ED suggested that agencies seeking to accredit graduate degree programs confer with employers, to all programs. Gellman-Danley, however, was concerned about how this would affect institutions offering liberal arts degrees with less-defined career paths.

ED also sought to strike a requirement that agencies must demonstrate approval of its policies, procedures, and decisions to grant or deny accreditation from three entities—educational institutions, licensure boards, and employers—and instead require them to do so only from practitioners or employers. ED said its reasoning behind this was to prevent “credential creep,” or the inflation of job requirements, however negotiators representing both accrediting agencies and institutions expressed concerns with this change. For example, McComis said that support from licensure boards is important as “almost all licensing bodies require accreditation to sit for licensing requirements,” and William Pena of Southern New Hampshire University, representing institutions primarily offering distance education programs, argued that not consulting with licensure boards would introduce even more risk for students enrolled in distance education programs.

Negotiators ended the discussion with a request from ED for suggestions as to when and how accrediting agencies should be allowed to waive certain criteria for institutions in order to promote innovation or in cases where the institution “cannot reasonably be expected to comply with a given standard.” Terry Hartle of the American Council on Education (ACE), representing private, nonprofit institutions, suggested that in order to encourage accrediting agencies, which “by nature are conservative organizations,” to approve innovative ideas from institutions, ED should take some of the responsibility if the implemented new ideas are found to be problematic. He suggested that accreditors considering granting approval to institutions with experimental efforts be encouraged to inquire from ED about whether they should in fact grant approval to those institutions, with the understanding that ED would take some of the blame if the school fails to produce positive results. ED said it will pick back up with this conversation at the next accreditation session.

During the period of public comment, Rep. Mark Takano (D-CA) warned that “the changes proposed by the department directly conflict with the safeguards in the Higher Education Act,” adding that ED’s proposed language “undermines the job of Congress and its intent to protect students.” Specifically, Takano told the room of negotiators and ED representatives that “lowering standards for accreditors is a total abdication of the department’s responsibility to put the students first.” 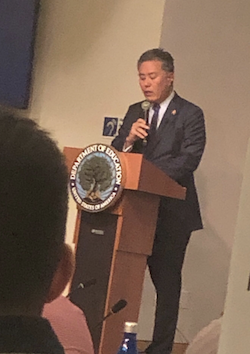 Other public comments targeted ED’s break from tradition to release draft regulatory language prior to this first neg reg session—whereas in the past this meeting was used as a brainstorming session—and argued that it has caused confusion among the negotiators.

“Yes we brought language, but our intention is to hear from you,” ED representative Annmarie Weisman reiterated at the end of the session. “Go back… let us know what the concerns are.”

ED will now have time to rewrite the draft regulations, which they will present to negotiators for another review at the second three-day session beginning February 19. In the meantime, subcommittee sessions on distance learning and educational innovation, TEACH Grants, and faith-based entities—which are not open to the public but will be livestreamed—will take place over the next two days, on January 17-18, and meet again February 12-13—a few days before the larger committee reconvenes. ED said the subcommittees will present their findings to the larger committee either before its second meeting or final session in March. Stay tuned to Today’s News for coverage of those discussions.

Aesha - in the 2016 defense to repayment Neg Reg meetings, we got visits from both Elizabeth Warren and Maxine Waters. Some people were of course thrilled to have them there, while those with opposing political views were outraged that Neg Reg could be politicized (uh, it's the work of a department led by a member of the President's cabinet, of course it's politicized...by definition, it's politicized).

So there is precedent for Congressional participation, and the lawmakers showing up and speaking themselves have far more impact than staffers ever could.

I was surprised and impressed to see a congressman provide public comment himself, instead of simply sending a staffer. Being a bit new to the negreg watcher club, I wonder if this will have any impact for any of the parties--particularly ED--knowing that (some) members of congress are watching this fairly closely.

Congressman Takano is correct. In an era in which college is less affordable than ever, with no real relief in sight for most, blatantly weakening consumer protections is not a good look. But I expect no less from the administration led by the founder of Trump University.

Where Can My School Submit Questions About Prison Education Programs (PEPs)?

Must a Prison Education Program (PEP) Lead To Licensure Or Certification?

Does a School Participating In the Second Chance Pell Experiment Automatically Qualify For the Pell Grants For Prison Education Programs?

When Prorating Loans For a Program Subject To the Clock-to-Credit-Hour Conversion, Do We Use the Converted Credit Hours?

Is It Permitted For Our Adjunct Instructors To Be Paid By an Ineligible Third-Party Institution Under a Written Arrangement?

How Do We Confirm That We Meet a State's Requirements For Offering Distance Education Courses To Students Located There?

How Do We Confirm That We Meet California's Requirements For Offering Distance Education Courses To Students Located There?

Under What Circumstances Must an Owner Sign the Program Participation Agreement?

Is R2T4 Required If an Academic Program Is Paused Due To an Instructor's Unscheduled Vacation Or Employment Termination?

When Does a Student Gain Title IV Eligibility If an Academic Program Becomes Eligible In the Middle Of a Payment Period?