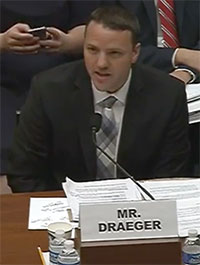 During a joint congressional hearing on Wednesday, several witnesses from within different areas of higher education spoke about the operation of the Department of Education’s (ED) Office of Federal Student Aid (FSA) as a performance-based organization, identifying numerous inefficiencies and areas for improvement.

“Numerous reports reveal FSA is rife with inefficiencies that have led to a lack of communication with students, institutions, and loan servicers; improper payments; inaccurate reporting of data; failure to ensure borrowers are aware of the repayment options available to them; mismanagement of contractors and vendors; and poor customer service,” said Rep. Virginia Foxx (R-NC), during her opening statement. “This is about more than checking boxes. When FSA fails to fulfill its responsibilities, it jeopardizes our investment in students. We need to demand better.”

During the hearing – held by the House Oversight and Government Reform Committee’s Subcommittee on Government Operations and the House Committee on Education and the Workforce – members of Congress heard from James Runcie, chief operating officer of FSA; Justin Draeger, president of NASFAA; Melissa Emrey-Arras, director of education, workforce, and income security at the Government Accountability Office (GAO); Inspector General Kathleen Tighe of ED; and Ben Miller, senior director of postsecondary education at the Center for American Progress.

Testimony from Emrey-Arras focused on how certain inefficiencies within FSA limit its ability to monitor its contractors, specifically student loan servicers. The GAO found, for example, that FSA does not give clear guidance or instructions to servicers for how to apply over- and under-payments to borrower accounts. The GAO also took issue with FSA’s methodology for monitoring and documenting the results of phone calls between servicers and borrowers.

Tighe said in her testimony that FSA needs to work to improve its oversight of its contractors to ensure all participants are serving the interest of students. A 2015 audit also showed, Tighe said, that the FSA has several weaknesses in its program review process – an issue that Draeger also brought up later in the hearing.

While the witnesses identified several areas for improvement within FSA, they also pointed out successes that have taken place over the last few years.

Miller noted the “near-seamless shift” from the Federal Family Education Loan (FFEL) Program to Direct Lending, and improvements to the loan repayment process. But Miller also echoed earlier comments that FSA needs to improve its oversight of institutions, contractors, and lenders, and added that it could release data to help better inform policymakers, students, and families. Several witnesses, including Miller, also said part of FSA’s operational inefficiency could stem from the complexity of the aid programs it oversees. If Congress were to reduce and improve the numerous loan repayment options, for example, it could help both FSA and students, Miller said.

“We view ourselves as partners with FSA and celebrate their successes, particularly in regards to simplifying the student aid form and improving their counseling tools,” Draeger said during the hearing. “These successes notwithstanding, FSA is consistently falling short in other areas, particularly in their partnerships with schools, and that has detrimental effects on students.”

Draeger went on to describe several of FSA’s operational shortcomings over the last several years, including a lack of partnership and a lack of accountability. Draeger described in further detail in his full written testimony how FSA also has a tendency to step outside its purview.

“The most pervasive problems at FSA,” Draeger said, “are long delays in program participation agreement changes, program review closures, delayed guidance in relation to deadlines, and even simple benchmarks about how long it should take to get a response on compliance inquiries.”

One recent example is the rollout of ED’s gainful employment reporting, which Draeger said could be described as “nothing less than a time-consuming debacle that took already-limited time away from counseling students.” While ED was still sending delayed guidance to schools, Draeger said, it also began sending threatening letters to institutional leaders, claiming they had been noncompliant with the regulations.

“Despite the examples we have cited here and in our testimony, as best as we can tell, FSA continues to give itself high marks...,” Draeger said. “We truly do see FSA as a partner, but partnership is not a one-way street.”

If you missed the hearing, you can watch a video of the event on NASFAA’s website, where Draeger’s full submitted testimony and a press release on the hearing are also located.

Justin, I can't thank you enough for your accurate representation of the current struggles faced by financial aid administrators and the negative impact on the students and families we serve. I found it encouraging that many members of Congress, particularly Chairwoman Foxx, appeared to have a good understanding of higher education issues and a desire to hold the Department of Education accountable. Please continue your advocacy with regard to the Gainful Employment Reporting debacle. It is clear to me after reviewing recent DOE guidance on the GE Completers List evaluation and challenge process, that financial aid administrators will continue to struggle with the implementation of these regulations.

Thank you Justin and NASFAA for representing us and, as Emily O pointed out, for saying the things we don't feel we can say. This fall I truly felt "bullied" by the whole GE experience and I'm glad FSA was called out on it, among other things. Thank you.

I watched the hearing and gained many insights to what is really going on with FSA. We have a long way to go to really be partners with FSA and serve our students in a productive and consistent manner. Justin is to be congratulated on a job well done. He represented us well. Dick B.

Thank you to Justin, and all of NASFAA, for everything that went into this testimony (both written and at the hearing) and for saying the things that we (as you so correctly pointed out) don't always feel we can say. I am so very proud to be a member of NASFAA and of the representation that you provide for us, always.

I thought yesterday's hearings can become something very productive...whether or not they do will depend on what actions our colleagues at ED take moving forward. That no PPM exists to guide loan servicers so that borrowers are all treated and serviced fairly and equally...that's just wrong (try telling a program reviewer that your office doesn't have written policies and see what happens). The absence of such a manual means that borrowers are all at the mercy of however a for-profit servicer wants to do business, which is typically in a way to increase their profits. That's not what this is supposed to be about.

And don't get me started on the politics. Obama couldn't make it, so James Runcie took the "so you mean to tell me that this Administration..." comments on the jaw over and over.

Thank you for representing us, Justin, you were diplomatic but didn't pull punches.

OTC From the Field: Examining and Addressing Needed Reforms to the Student Loan System

OTC Inside the Beltway: Legal Challenges Look to Create Roadblocks for Debt Cancellation

Fresh Start and Debt Cancellation: What You Need To Know

OTC Inside the Beltway: What to Know About Operation 'Fresh Start'

OTC Inside the Beltway: Sorting Through Biden's Decision on Student Loan Debt Cancellation